'The Caged Virgin': A Call for Change in Islam

Dutch parliamentarian Ayaan Hirsi Ali, a native of Somalia who emigrated to The Netherlands in the early 1990s, is no stranger to controversy among her fellow Muslims. Living in the West, she felt free to publicly criticize Islam's treatment of women.

But that freedom came at a price. In 2004, a short film Ali scripted called Submission was shown on Dutch television. In the film, naked women veiled with see-through shrouds painted with verses of the Quran kneel in prayer, telling their stories as if they are speaking to Allah.

The film's co-writer and director Theo Van Gogh was later stabbed to death by a Muslim radical. A letter pinned to the body with a dagger threatened Ali's life. Since then, she has been under the constant protection of body guards.

The danger hasn't stopped her from remaining outspoken about her beliefs. Ali calls her new collection of essays, The Caged Virgin, an "Emancipation Proclamation" for women and Islam. 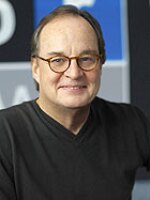 Alex Chadwick
For more than 30 years, Alex Chadwick has been bringing the world to NPR listeners as an NPR News producer, program host and currently senior correspondent. He's reported from every continent except Antarctica.