When Patrick and Sharon O'Toole began their ranching business on the Wyoming-Colorado border, they tended the sheep themselves. But eventually, the O'Tooles wanted to settle down and have kids, so they hired foreign ranch hands with H-2A, or guest worker, visas to work on the ranch for $750 a month.

Peruvian shepherds on guest worker visas tend thousands of sheep in Wyoming, but they only make about half of what agricultural workers elsewhere are paid.

Under the U.S. Senate's newest immigration proposal, these guest workers would receive a special exemption from minimum wage rules. The proposal has stirred disagreements between ranch owners and workers' rights advocates.

These exemptions from minimum wage and other standards help keep the lamb and wool industry in the U.S. alive, says Peter Orwick, executive director of the American Sheep Industry Association.

"Lamb is one of the very few meats that are free traded in America," Orwick says. "A lot of agriculture either has price supports or protections from imports. The U.S. sheep industry is successful without either of those."

But labor rights advocates insist that paying workers less than minimum wage is a form of government price support that comes at the expense of the workers.

One example is in California, where the sheep industry remained strong despite the state raising wages. And it's not just about money, says Valerie Schoneberger, an attorney at Legal Aid of Wyoming. Herders are also vulnerable to bad working conditions, she says.

"A lot of them make complaints about not having adequate access to medical care, not being paid according to the contract, and not being provided sufficient or adequate food or water," Schoneberger says.

Freddie Palomino came to the U.S. from Peru on a sheepherding visa but says he was employed primarily as a ranch mechanic nearly 70 hours a week. He was shocked by his living conditions on his first day on the job in Utah.

"I barely could even fit there, not even to walk," Palomino says. "Nothing was working. The fridge, nothing like that was working."

In Wyoming, working conditions continue to get worse because ranches are only inspected once every three years. Heather Ondo, who used to inspect ranches for the state of Wyoming, says she believes mistreatment of foreign guest workers is a widespread problem.

But talk so far hasn't led to many changes for shepherds. The low pay and most of the controversial working conditions are not addressed in the Senate bill, which is scheduled to be voted on before July 4. 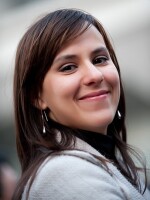 Sara Hossaini
Sara Hossaini is a reporter for Wyoming Public Radio. She holds a bachelor's degree in broadcast journalism from the University of Nebraska-Lincoln. She brings a blend of documentary journalism and public interest communications experience developed through her work as a nonprofit multimedia consultant and Associate Producer on national PBS documentary films through groups such as the Center for Asian American Media, Fenton Communications and The Working Group. She likes to travel, to get her hands in the dirt and to explore her creative side through music, crafts and dance.
See stories by Sara Hossaini