The 1st Day At A Georgia Mall After The Reopening

To Georgia now. It is one of several states easing coronavirus restrictions today. Most shopping malls there remain closed, but some opened for business for the first time since early last month. Emil Moffatt of member station WABE went to see who showed up.

EMIL MOFFATT, BYLINE: At 11 a.m. when North Georgia Premium Outlets officially opened, there were no lines of shoppers waiting to get in the stores and hardly any cars in the massive parking lot that rings the outdoor mall. There were just a few dozen people strolling along the pathways between shops. Jeff Imel (ph) and his wife drove here from Jasper.

MOFFATT: What the Imels weren't expecting was that most of these shops were closed.

IMEL: A lot of the stores are not open, it looks like. So I guess it was up to the individual corporations whether or not they wanted to open the stores.

MOFFATT: Miguel McNair (ph) drove an hour from Atlanta to shop for pants, socks and shoes, but he didn't have any luck either.

MIGUEL MCNAIR: Hoping that the Adidas store was open. I'm preparing to move. I just wanted to get some new stuff. It said it was supposed to be open, but it's not. I don't know what other stores are open.

MOFFATT: As businesses debate whether to reopen and people consider leaving their homes, Georgia is still dealing with an increase of COVID-19 infections. Today, the state reported an additional 1,000 positive coronavirus cases just in the last 24 hours. As McNair walked around the mall, he wasn't wearing a face mask.

MCNAIR: I'm ex-military, so I've lived in third-world countries. And I'm not trying to downplay what's going on here, but I've been in countries with worse diseases than this.

MOFFATT: At the mall today, a worker who was wearing a mask used a spray bottle with disinfectant to clean the common areas. None of the store owners or employees would talk on tape about what they're doing to protect customers or workers. But at SAS Shoes, there was a sign on the door limiting occupancy to three shoppers. Elsewhere, the mall had displays encouraging social distancing. The children's playground was closed, along with the food court. Danny Pennywell (ph) drove up from Atlanta and didn't mind that most of the shops were closed.

DANNY PENNYWELL: It was great. I mean, there's not much open, but it was a nice walk.

MOFFATT: And as he enjoyed the day, he was also mindful to keep his distance.

PENNYWELL: I wore my gloves. I wore my mask. I walked six to eight feet apart. And I didn't talk to anybody (laughter).

MOFFATT: The sunny and breezy first day of May was a good day for a walk. As for actual shopping done at this premium outlet, most of that will have to wait until more stores decide to reopen. For NPR News, I'm Emil Moffatt in Dawsonville, Ga. Transcript provided by NPR, Copyright NPR. 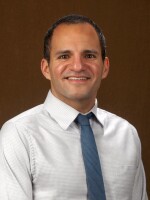 Emil Moffatt
Emil Moffatt returns to WKU Public Radio as station manager. Moffatt was previously at the station from 2013-2014 as local host of All Things Considered. His new duties also include overseeing operations for WKU’s student station, WWHR 91.7. Moffatt’s news experience includes a year at Nashville Public Radio and three years at WBAP radio in Dallas. Prior to that, Emil was a minor league baseball play-by-play announcer in Fort Worth, Texas and a producer for Dallas Stars radio broadcasts. Moffatt holds a bachelor’s degree in journalism from the University of Texas at Arlington. He is an avid runner and enjoys movies and live music.