How Mt. Vernon's History Is Being Retold

As America continues its reckoning with racial injustice, the question of how and what to memorialize comes up often. And at George Washington's Mount Vernon, where the Founding Father kept people enslaved, the conversations will likely get more uncomfortable. And some say it's a welcome change. Esther Ciammachilli from member station WAMU went to Mount Vernon and has this report.

ESTHER CIAMMACHILLI, BYLINE: As the head of African American interpretation at Mount Vernon, Brenda Parker helps tell the stories of the people who were enslaved here hundreds of years ago. One way she does it is by playing Caroline Branham, a former housemaid to George Washington. And this is how she explains to children how families were torn apart.

BRENDA PARKER: (As Caroline Branham) If your grandmother gave to you a dog and that dog did have a litter of puppies, it would be your choice to keep one, sell one and give one away as a gift. That's how we're thought about.

CIAMMACHILLI: She then switches out of character and explains to me the importance of making it real for the youngest visitors.

PARKER: Understandable enough for a child and the adult starts to get a little uncomfortable. But that's fine, and that's good (laughter) because this is uncomfortable.

CIAMMACHILLI: It's uncomfortable but not unprecedented for the conversation to change. What passes as history at Mount Vernon has evolved over the years. It's now less about extolling Washington's virtues and more about the lives of the people who worked and cared for this property. As a Black woman, this is personal for Parker.

PARKER: Because everything, everything was Washington centric. I get it. We're on his property. But if it weren't for us, he would not have had that property.

CIAMMACHILLI: Washington was only 11 years old when he inherited his first slaves. This was a surprise to visitor Chiara Galloway, who's only 13. After seeing the confined conditions of the slave quarters, she realized that having to share her bedroom wasn't so bad.

CIAMMACHILLI: The exhibit "Lives Bound Together: Slavery At George Washington's Mount Vernon" gives visitors a new understanding of the lived experiences of the enslaved people and how intertwined their lives were with Washington's. The massive glass entrance is emblazoned with their names, and a bust of America's first president is visible directly through it. Susan Schoelwer is the senior curator of the exhibit.

SUSAN SCHOELWER: You see Washington through the names of this community that surrounded him. And, arguably, what Washington accomplished relied upon what they did on an everyday basis.

CIAMMACHILLI: At the south end of the property, shrouded by tall trees, is the slave cemetery.

PARKER: It is my absolute favorite spot.

CIAMMACHILLI: Brenda Parker says she comes here to find solace and, sometimes, to sing to the ancestors.

CIAMMACHILLI: Archaeologists have uncovered 80 graves so far. Mount Vernon curators are looking to the cemetery and the stories of the enslaved people as a way to offer a more nuanced understanding of how the country got to this current moment of reckoning.

PARKER: (Singing) My Lord, he calls me. He calls me by the thunder. The trumpet sounds within my soul. 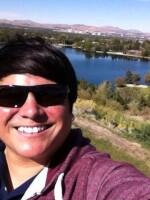 Esther Ciammachilli
Esther is a KUNR alum, who left the station in mid-October to take the afternoon host position at WBHM public radio in the much larger market of Birmingham, AL. She's excited for the career opportunity, where she will also be closer to family.