President Trump and Democratic presidential nominee Joe Biden faced off for the last time Thursday night in Nashville. It was the final time the candidates could make their pitch to voters while sharing the debate stage before voting concludes on Nov. 3.

Kristen Welker of NBC News moderated in front of an in-person audience at Belmont University. All audience members were be required to wear masks.

The debate was divided into six 15-minute segments on topics set by the moderator: COVID-19, American families, race in America, climate change, national security and leadership.

Under new rules announced Monday by the Commission on Presidential Debates, each candidate had two minutes of uninterrupted time at the top of every segment to answer Welker's questions. The other candidate's mic was muted during this time, a change the commission made after a widely criticized first presidential debate that was marked by constant interruption.

With Biden holding a 10-point lead over Trump in an average of national polls, Thursday's debate is one of the president's last chances to shift the momentum of the race.

A recent NPR/ PBS NewsHour/Marist poll found that just 5% of voters are still persuadable. And according to the United States Elections Project at the University of Florida, more than 47 million people have already voted. 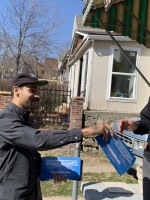