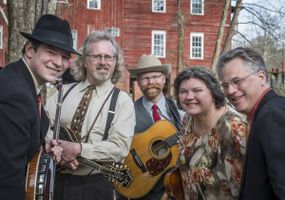 Monroe Crossing will perform a concert of bluegrass music Monday, January 27, at 7:00 p.m. at the Collins Theatre, 120 West Emerson Street, in downtown Paragould, Arkansas. The concert is part of the Bluegrass Monday concert series presented by KASU 91.9 FM. KASU will literally “pass the hat” to collect money to pay the group. The suggested donation is $5 per person.

Named in honor of the creator of bluegrass music, Bill Monroe, the band Monroe Crossing plays traditional bluegrass music, gospel songs, original melodies, and their own unique arrangements of songs that originated in a style of music other than bluegrass. The group is celebrating its 20th anniversary in 2020.

In their career, the group has performed over two-thousand shows at bluegrass festivals, churches and venues across the country. In addition to touring across the United States, the band has also toured through Canada, Europe, and Southeast Asia.

Monroe Crossing has recorded 17 CDs and has produced a concert DVD. A CD, including music recorded live at past Bluegrass Monday performances, was released by the band in 2015.

Lisa Fuglie is a founding member of Monroe Crossing. She plays fiddle, guitar and mandolin, plus she is a featured lead vocalist for the group. She was raised in Nigeria, Africa, and she first discovered bluegrass music through a 78 RPM record of music by Bill Monroe. Fugile has also performed with the groups The Hers, The Outskirts, and The Deadly Nightshade Family Singers. In addition, she received a Folk Arts Apprenticeship Grant from the Minnesota State Arts Board to study fiddle with Bill Hinkley, an acclaimed musician from Minnesota.

Matt Thompson of Mankato, Minnesota, plays mandolin and fiddle, and he is also a founding member of the group. He is a past winner of the “Mandolin Player of the Year” award given by the Minnesota Bluegrass and Old-Time Music Association. Plus, he serves as emcee for the band during their concerts. Thompson has played bluegrass music in many bands over the past 30 years, including True Blue, a group which appeared on Garrison Keillor’s “A Prairie Home Companion” nationally-syndicated public radio program.

Mark Anderson plays bass in the group. His first musical experience was playing in alternative rock bands, but his musical tastes changed dramatically after being introduced to bluegrass music in 1995. Anderson is known for the energy and humor he brings to Monroe Crossing’s live performances. He is also a founding member of the band, and he has written original songs for the band which appear on their CDs.

Derek Johnson sings and plays guitar. Similar to Anderson, his first musical experiences were in rock-and-roll bands, but he too discovered a love for bluegrass music. Prior to joining Monroe Crossing in 2011, Johnson co-founded the High 48s Bluegrass Band, a group which released four CDs, toured nationwide, and won the prestigious Rocky Grass Bluegrass Band Competition in 2008.

For their performance in Paragould, the lineup of Monroe Crossing will include founding banjo player in the group Benji Flaming. Flaming began playing banjo at age ten, and he released his first recording at age twelve. He has been a featured performer at the International Bluegrass Music Association’s FanFest and on their “Masters’ Workshop” stage. He is also a past winner of the Banjo Player of the Year award given by the Minnesota Bluegras