Unless there has been a rush of people this week who successfully logged on to a state website before a 9 p.m. deadline Thursday, thousands of Arkansas Works enrollees will be out of compliance with a newly enacted work requirement.

Marci Manley, a spokeswoman for the Arkansas Department of Human Services, says that of the 8,534 people who needed to check in, as of June 29, only 370 had reported that they were in compliance. If the enrollees fail to report their information for three months over a 12-month period, she says they will lose their healthcare coverage.

"The first individuals that could lose coverage for non-compliance with the work requirement would be after June, July and August. They would have to be non-compliant for all three of those months before their cases and coverage would close," Manley said.

The work requirement was one of several changes Gov. Asa Hutchinson has successfully implemented to the state's Medicaid-expansion program. Enrollees must report their work activities or show why they should be exempt.

Hours before Thursday's deadline, Hutchinson defended the change, calling the online verification process "very simple" and a way to know who is truly qualified.

Marquita Little, health policy director for Arkansas Advocates for Children and Families, says the large number of enrollees who have not reported their activities and are expected to be out of compliance shows that a significant number of people are having difficulty with the new requirement.

"These types of eligibility standards can make the entire process of enrolling in coverage and maintaining your coverage very difficult. The nature of how the reporting has to occur through the electronic portal poses significant challenges for a lot of Arkansans who have limited internet access," Little said.

DHS has been working to train social workers and provide information to advocacy groups to share with people being impacted by the work requirement. Little said the final numbers will show the success or failure of those outreach efforts.

"It will give us some insight into maybe the ease or difficulty people are having with either meeting the requirement or understanding the portal or electronic system that they'll have to use in order to qualify for an exemption," Little said.

Homeless and low income people will be impacted, she said, by having limited or no access to the internet. Others may just not understand what they need to do or be willing to spend the needed time to complete the process.

Hutchinson told reporters Thursday that it makes sense to him that the number of people receiving Arkansas Works benefits will decline and that there could be many reasons enrollees are out of compliance.

"We are wondering, 'Do you still need the insurance? Have your circumstances changed? Contact us and verify it.' If they don’t contact us, that could mean that they are no longer in need of it.”

A federal waiver was approved for Arkansas in March and the requirement was enacted last month. 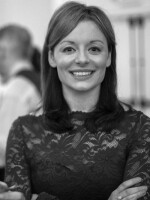 Karen Tricot Steward
As Content Development Director, Karen Tricot Steward oversees the creation of news and cultural programming and helps set standards and best practices. She manages content on our website and social media. Karen also coordinates the internship program and collaborates with journalism professors at the University of Arkansas at Little Rock to teach students, helping fulfill public radio’s goal of serving the community by being a place of learning.
See stories by Karen Tricot Steward

Michael Hibblen
As News Director, Michael Hibblen oversees daily news coverage for KUAR. He handles assignments for the news staff, helps develop story ideas and edits copy. Michael isresponsible for starting a news-sharing partnership between public radio stations in Arkansas in 2009 which laid the foundation for what became Arkansas Public Media. He is also a regular panelist and fill-in host on AETN's Arkansas Week, where journalists discuss issues in the news.
See stories by Michael Hibblen