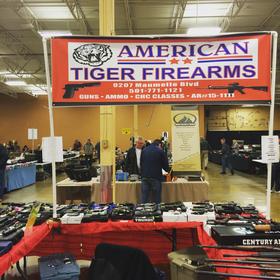 Recently released FBI data shows Black Friday gun sales set a single-day record for background checks at just over 203,000. And a number of Arkansas stores are claiming strong sales through the holiday weekend and Cyber Monday as well.

Rusty Fisher with Sunrise Outfitters in Searcy says his shop was no exception.

“Definitely we had a very good day and for some reason this year was up quite a bit. I think just about all the gun stores across the state noticed an increase in sales. We had exceptional sales on Black Friday. It was generally spread over the spectrum of guns.” Fisher continued, “There were very few sporting rifles as people would say, the AR style guns not as much of those, but lots of personal defense guns and also deer rifles.”

Fisher says he was surprised sales were so high while Republicans control the White House and Congress – and stand in the way of Democrats’ gun control efforts.

“I would have actually expected a decline. You wouldn’t have the rush for people thinking they couldn’t get them anymore so they were going to make one more run for a gun. So I was surprised that would be the fact that it would still be that interesting to people,” he says.

While the FBI releases data on the number of background checks overall sales numbers are not posted. NPR considers background check requests as “the best available proxy for gun purchases.”

It’s not just Black Friday that spurs high sales numbers; the extended holiday season generally is good for gun shop owners. That’s a reality the owner of American Tiger Firearms in North Little Rock plans to capitalize on. Bryan Hearn says he took this year off from operating his family-owned shop to spend time with his elderly parents in Louisiana.

“I figure the people that were looking are still going to be buying, and they still are, Cyber Monday was good for my store,” says Hearn. “I probably lost a few sales, a few dollars, but family has got to come before the dollar.”

Hearn too says he’s noticed past efforts to enact gun control legislation have driven sales numbers upward, but he thinks such talks today by Democratic lawmakers don’t give his customers as much worry as it used to.

“Anytime they talk about it there’s going to be a panic set through but a majority of the people have seen it so much now-days they don’t pay attention to anything like that. It’s not like it was back in the 90’s,” Hearn says.

Arkansas households already own a larger share of guns than most states. A 2015 Business Insider report found 57.9 percent of Arkansans own at least one firearm. Alaska topped their list at 61.7 percent while only 5.2 percent of Delaware’s residents own a gun.