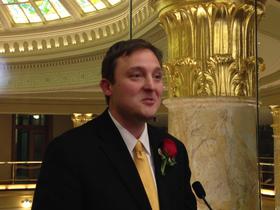 Arkansas House Speaker Jeremy Gillam is resigning this month to take a governmental affairs job at the University of Central Arkansas.

The move opens up a leadership vacuum in the state legislature and is riling up democrats, who see it as a sign of a revolving door between lawmaking and lobbyist-like activity.

The Republican from White County had already announced he wasn’t running for re-election. The House will caucus June 15 to elect an interim speaker.

Gillam told KUAR it’ll be a welcome change of pace, "This was the perfect opportunity for me to be able to continue to do what I enjoy doing by helping and making a difference in people’s lives. But to do so in an environment that would allow me to be with my family more as well."

Gillam said he did not have the UCA job lined up when he decided to retire from the Legislature.

“This was not on the horizon,” said Gillam. “I just trusted the good Lord had a plan and I just tried to be obedient and stay out of the way and let him lead.”

But Democratic Party of Arkansas Chair Michael John Gray suspects Gillam knew he was getting the job.

“None of us were shocked that he was getting this position. It’s something that’s been out there, a worst kept secret for a while,” said Gray.

However, Gray says he doesn’t fault Gillam for taking the position and applauds UCA on getting an effective director of Governmental Affairs and External Relations. But, Gray says it's blurring the lines between lawmakers and lobbyists.

“Our Capitol is full of ex-elected officials that are now either lobbyists or in government relations positions. I think the public saw a problem with that in 2015, when they passed a cooling off period where no elected official could lobby for a year. There’s a little bit of a loophole here for governmental relations positions and Speaker Gillam is definitely not the first.”

The House will meet June 15 to elect an interim speaker. State Rep. Matthew Shepherd (R-El Dorado) was elected at the close of the last legislative session as Speaker-designate, to begin serving in 2019. Gillam said he expects Shepherd to take the role for the remainder of the current term.

UCA President Houston Davis is enthusiastic about the appointment, “Speaker Gillam brings a knowledge and understanding of critical issues and relationships within Arkansas that will ensure UCA is an active leader in advancing our state.”

Gillam’s first term in the House began in 2011. During his tenure Republicans rose from minority status to take supermajorities in both chambers, as well securing the governor’s office. He is one of five speakers in Arkansas history to serve in the top post for two terms, starting in 2015.

During his tenure he shepherded a rule change fundamentally altering the committee assignment process. Gillam ushered in a rule concentrating power in the speaker’s office, giving the House leader sole authority to assign committee make-ups. Previously, individual lawmakers could choose which committee to serve in based on seniority.

Chair Gray says Democrats, despite their minority status, had used the previous rules to stack the House Revenue and Tax Committee – to the embarrassment of Republican leadership.

“Speaker Gillam took it on the chin politically when the Democrats were able to stack a committee. The political heat over that was really something that he had no real control over. I think his correction, with the rule change, went too far to the extreme.” Gray continued, “But I don’t see those rule changes being a lasting legacy for him. I’d be surprised if that doesn’t change sometime in the future.”

Gillam says the rule change was just a matter of getting in line with the best practices used in state Houses throughout the country.

“There are 47 other states that are doing this. By studying this and seeing how it works…and realizing our members were wanting to change things. It was logical to join the rest of the country in how we select our committees,” said Gillam.