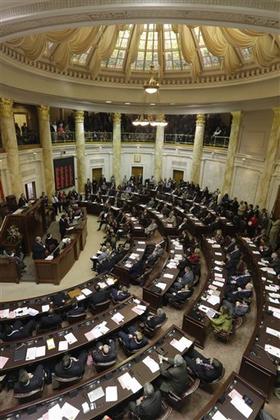 Lawmakers on Monday got their first look at the proposed Revenue Stabilization Act, the budget bill that calls for a nearly $173 million increase in spending for the fiscal year that begins July 1. The Joint Budget Committee is expected to take up the measure on Tuesday.

The proposal mirrors Gov. Asa Hutchinson's proposed budget unveiled in January. About $138 million of the funding increase in the proposal would go toward Medicaid. The bulk of the surplus money set aside would go toward a reserve fund that Hutchinson has said would set the stage for tax cuts next year.

Days after Arkansas's biennial fiscal session began last month the CSPAN bus rolled into Little Rock, and Gov. Asa Hutchinson hopped aboard. The very first question moderator John McArdle put to Hutchinson was about a balanced budget — specifically, does Arkansas have one?

"Oh, absolutely. We don’t have a deficit in this state. It’s mandated by the [state] constitution to have a balanced budget, which means that we forecast the revenues, then we spend according to that forecast, and if during the course of a year, we don’t meet forecast then we reduce spending. ... We call it the 'Revenue Stabilization' law, which is a toggle, if you will, but it makes us control spending, reduce spending as needed, to make sure it mirrors our revenue picture.  There’s a few things the federal government could learn from this."

The fiscal session is underway in Little Rock, and the big issue for consideration is a tax cut proposal for the top earners in the state.  Governor Hutchinson proposed this during his State of the State address last week.  He wants it to go into effect sometime next year.  State Sen. Ron Caldwell (R-Wynne) and state Rep. Vivian Flowers (D-Pine Bluff) sat down with Roby Brock of Talk Business for a conversation on this proposal.