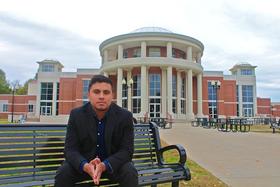 Grassroots electoral organizing in the Indivisible and "Resistance" strain continues to gain steam in Arkansas, with the launch this week of a new project Progressive Latinx in Arkansas Politics. Springdale-based organizer Irvin Camacho is spearheading the effort. He says the moment is right for Arkansas’s growing Latino population to become ingrained in the state’s electoral politics.

"I'm worried for my community. I'm worried what's going to happen in the next few years if we don't let our voices be heard," says Camacho. "People are mad, people are anxious, and people are ready to do something. I'm using this political climate right now to really get people engaged in elections locally and statewide."

However, some districts particularly in northwest Arkansas have much higher percentages. In 2016, Comacho unsuccessfully ran for state House in a district including parts of Springdale with a population that was more than 40-percent Hispanic. The then 24 year-old ran as a Democrat and garnered 43 percent of the vote against Republican Jeff Williams, a former city councilman.