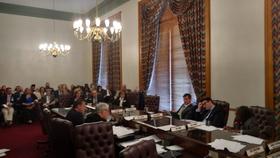 Legislation is advancing to expand the scope of telemedicine in Arkansas.

Republican State Sen. Cecile Bledsoe of Rogers is the lead sponsor of the telemedicine bill, SB146, which advanced out of the Senate Public Health, Welfare and Labor Committee on Wednesday. Bledsoe explained that under her legislation, telemedicine could be legally practiced beyond official clinical settings, to anywhere a patient is located.

“And that, ladies and gentleman, was a very big deal,” she said. “That was one of the things that the people, who were so patient, look forward to.”

Bledsoe said the bill--a revision of a law passed in the 2015 session--also builds on the definition of what is considered telemedicine.

“It expands to include all types of electronic information and communication technology. That means you can even use your iPhone,” she said.

The bill would also allow for health insurance to cover electronic consultations with physicians or other medical personnel who provide services comparable to in-person settings. Several representatives from medical and hospital associations around the state spoke in favor of the bill. They said it would provide options to people living in rural areas who don’t have regular access to specialized medical treatments. But Democratic Sen. Stephanie Flowers of Pine Bluff and Republican Sen. John Cooper of Jonesboro raised concerns over the lack of a provision to require parental authorization for kids in school who may be subject to treatment via telemedicine.

“You’re writing a law that’s going to go in the statute that doesn’t even say anything about the parent or the guardian giving consent. Some parents object to some things, procedures that might go against their religious beliefs. I think the parent certainly ought to be mentioned,” Flowers said.

The lack of explicitly defined measure on parental consent also drew opposition from Arkansas Children’s Hospital CEO Marcy Doderer, who said she otherwise supported the expansion of telemedicine access for people living in rural areas. The bill advanced out of committee with Bledsoe’s assurance that she’d amend it to include a provision on parental rights. It now heads to the full Senate.