“Our claim is that the specific subsection the attorney general is using to reject what is now 70 of 70 proposed ballot measures, that provision is unconstitutional,” Gray says.

Actually, another subsection of Article 5, Section 1 of the state constitution — subsection B — allows for the attorney general to rewrite ballot language in anticipation of certification. Rutledge has not done that, Gray alleges in the suit.

The attorney general late today issued a statement calling on the legislature to fix the ballot initiative process. She called Supreme Court oversight of the process “very strict,” a “stringent test.”

By Gray’s count, Rutledge has rejected the language of every proposed ballot initiative for this year’s election 70 times.

Gray represents the groups behind two ballot efforts. One is the Committee to Restore Arkansans’ Rights. It wants to define and restrict the state’s claim of “sovereign immunity,” its exemption from state court action. The other is Driving Arkansas Forward, which wants to open four casinos in the state and “drive” some of that tax revenue to state roads.

The language for both of these ballot proposals has been rejected, over and over, without suggested new language, and Gray says, that help is specifically provided for in the constitution.

A spokeswoman for the Attorney General, Nicole Waugh, tried but could not facilitate an interview with Arkansas Public Media. 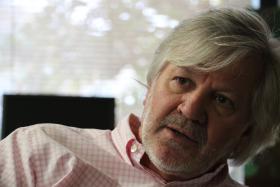 Also Thursday, lawyer David Couch, the state’s most prolific author of ballot initiatives, filed a similar lawsuit against Rutledge, this one at the state Supreme Court.

“Well, I think the Supreme Court needs to look at the proposed ballot titles and tell the attorney general that you need to accept one of those ballot titles, or if you think there’s some language that should be included or excluded from that, rewrite the ballot title.”

Couch has two minimum wage initiatives in the works for this year. One raises the minimum wage to $11 by 2021, the other to $12, by 2022. He modeled the draft language on his own successful minimum wage referendum in 2014, but Rutledge has repeatedly rejected his language this year.

Gray himself cited these cases as perhaps the most egregious examples of what’s going on.

“It’s like the goal posts are constantly moving and nobody knows how to get one of these certified,” he said. “I mean, these are attorneys who’ve been working on this for several years, a lot of experience and several amendments and measures approved and certified previously, and everybody’s just shocked and appalled at the conduct of the attorney general.”

In previous media reports Rutledge and her staff have said the Supreme Court’s decision late in the 2016 election cycle to pull a ballot measure — another casino measure — set a higher standard for ballot language.

“If you dislike the ballot title the sponsor has submitted, you [the attorney general] have the power to rewrite it yourself … and I think that’s what the Supreme Court should order her to do in the case I filed today.”

Couch is optimistic about Gray’s chances before Judge Griffen, perhaps more so than his own. The Supreme Court has already dismissed a similar attempt made by Driving Arkansas Forward, the casino measure, and in 2016 it turned Couch down on a campaign finance measure he was trying to get on the ballot.

This story is produced by Arkansas Public Media. What's that? APM is a nonprofit journalism project for all of Arkansas and a collaboration among public media in the state. We're funded in part through a grant from the Corporation for Public Broadcasting, with the support of partner stations KUAR, KUAF, KASU and KTXK. And, we hope, from you! You can learn more and support Arkansas Public Media's reporting at arkansaspublicmedia.org. Arkansas Public Media is Natural State news with context