ShareTweetEmail
Listen
Listening...
/
Co-author of the Indivisible Guide Billy Fleming speaks with KUAR's Jacob Kauffman about the close of the candidate filing period for Arkansas elections. 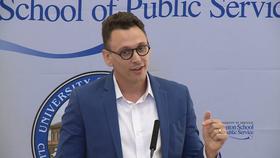 One of the founders of the Indivisible movement says Arkansas Democrats did a fair job of candidate recruitment compared to an anemic 2016 slate but the state party didn’t stack up as well it should have. The candidate filing period closed last week for Arkansas elections.

Listen to the full interview in the link posted above.

Co-author of the Indivisible Guide, Billy Fleming told KUAR it’s good that Democrats are running in every Congressional race and in 57 legislative seats (49 in 2016) but it pales compared to other states.

“Virginia came within a literal coin flip of flipping their House of Delegates race last year, they fielded 88 out of 100 candidates. Arkansas is fielding 57 [out of 100] and that’s great. That’s better than we’ve seen in recent memory but it is nowhere near enough to maximize the impact of this wave,” said Fleming.

But he also highlighted that what constitutes victory for Arkansas Democrats in November could have several definitions, “We shouldn’t discount the incredible power that would come from forcing Republicans to actually negotiate with them.”

“It comes down to around a 12 to 15 seat pickup in the state House, which is about what we see is the maximum reach for Democrats in Arkansas this year. If they were to get in that range," said Fleming, "and pump their minority up to the high 30s, low 40s that to me constitutes a wave. That would be something like I’ve never seen in my adult lifetime in Arkansas where the Democratic Party has only been hemorrhaging if not outright rapidly bleeding power.”

Republicans hold three-fourths supermajorities in the state House and Senate. That threshold is needed to pass all budget items. Democrats would need to pick up two seats to change that dynamic. And in some areas of the state, like northwest Arkansas, Democrats are running for virtually every seat.

He in-part credits groups like Indivisible for inspiring new candidates in some previously untapped terrain, many of them women and younger people.

“When I’ve heard from folks who filed form election this year,” he said, "they all talk about the energy, and the excitement, and frankly the new found power that groups like Indivisible have brought to a state where the Democratic Party has existed on paper but not maybe in reality for quite some time. For most people who run this year on the Democratic ticket they understand that if they’re going to pull off a couple of surprises, which they’re going to need to do to make this go from a trickle to a wave, they’re going to have to lean on those groups that have done the work organizing and building power for the last year and a half.”

Fleming suggests next cycle the Democratic Party of Arkansas could pick up more candidates if it lowers candidate filing fees, it stands at $3,000 for a state legislative race. He says it doesn’t make sense in one of the nation’s poorest states to charge one of the highest filing fees.

Fleming said on the Congressional front, he’ll release data next week that shows that northwest Arkansas’s 3rd District – where Steve Womack is seeking a fourth term as a Republican – may actually be more competitive than central Arkansas’s 2nd District. That was the last US House seat a Democrat held, when Vic Snyder retired in 2010.

Democrats didn’t even run a candidate in the 3rd District in 2016. This year Joshua Mahoney is running. The Democratic primary field is crowded in the 2nd District with Jonathan Dunkley, Paul Spencer, Clarke Tucker, and Gwen Combs all seeking to unseat incumbent Republican French Hill.