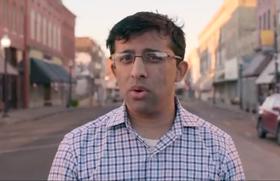 East Arkansas Democrats will have a primary election on their hands for the First District Congressional seat. Chintan Desai announced today he’s seeking the party’s nomination and to unseat Republican incumbent Rick Crawford in 2018.

In a campaign launch statement, Desai immediately points out that his roots are outside of Arkansas, “I wasn’t born or raised here, but I’ve been proud to call Arkansas home for the past seven years.” The California native is the son of Indian immigrants. Arkansas has never elected a person who isn’t white to Congress.

In a campaign video Desai stresses the importance of unity.

“This is a moment that requires people who can bridge divides between our past, our future, our newcomers, and our natives,” said Desai. “The Natural State has always had a flare for creating unlikely leaders. My unlikely story began when my parents moved to this country with little money and even fewer friends. They lived the American dream.”

Desai moved from California to Helena-West Helena to work with Teach for America and still works with KIPP charter schools as a regional Project Manager. He lists addressing the cost of higher education, income inequality gaps, gun control, and climate change as key concerns.

Retiree Robert Butler of Marmaduke is also seeking the Democratic nomination. In August contender Mike Nelson dropped out due to a “pending legal matter.”