Committee Advances Bill To Expand Where Concealed Firearms Can Be Carried 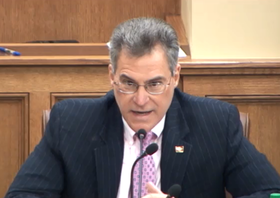 An Arkansas House committee has advanced revised legislation to greatly expand the carrying of concealed firearms in the state, but not before getting flak Tuesday from opponents of the bill, as well as gun rights supporters.

The original legislation approved by the House last month was limited to college campuses, but the Senate modified the bill to also allow guns at some government buildings, including the state Capitol, and private establishments like bars and restaurants.

The bill’s sponsor, Rep. Charlie Collins of Fayetteville, told members of the House Judiciary Committee Tuesday that it would address an ongoing problem.

"There are murders on about a monthly basis on school grounds throughout our country and periodically there are dozens of innocent people murdered while we look on. And we have not made progress in a broad way to add new ways of deterring these crazy killers from murdering people," Collins said.

But Austin Bailey with the group Moms Demand Action for Gun Sense in America argued both the original bill and the amended version "will make campuses less safe, not more safe, and it will make a lot of places less safe." The group, which has chapters in all 50 states, says on its website that it supports the 2nd Amendment, but with "sensible" gun laws. 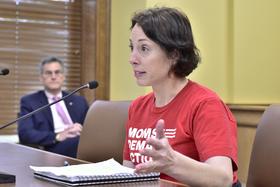 The modified legislation would require people to get eight hours of training from the Arkansas State Police, including how to respond to active shooter situations. But Brian Morrison of Mountain Home, who is a gun rights supporter, objected to the cost of that additional training on top of what is needed for a concealed carry license.

"How much money do we need to spend to keep our families safe when criminals won’t follow it," Morrison asked the committee. "You cannot guarantee this law will deter any crime. All it will do is restrict law abiding citizens."

The modified bill was passed on a voice vote and now moves back to the full House for consideration.