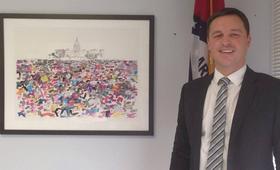 A Democrat has announced intent to run for the governor’s office in 2018. Jared Henderson was the executive director of Teach for America’s Arkansas division from 2013 to 2017 and is centering his campaign in part on “making teachers one of the most important professions in the state.” The 39-year old Arkansas native declared Tuesday he’s seeking his party’s nomination.

At this point Henderson is the sole Democrat in the race. Republican incumbent Asa Hutchinson is running for re-election and has high approval ratings. Though gun range owner and political pundit Jan Morgan has indicated she may challenge Hutchinson from the right. Mark West is seeking the Libertarian nomination.

Speaking to KUAR Henderson said a renewed, vigorous focus on education is among his top priorities.

“Our laser focus has to be making Arkansas one of the greatest places in the country to be a teacher. If we get an excellent educator in every room, if that educator has training and resources, and then we get out of his or her way we can build an excellent education system,” said Henderson. “If we do not, everything else is just on the margins.”

Henderson says a Democratic governor should be able to mobilize a Republican-controlled legislature over supposedly non-partisan issues like quality teaching.

“There have been well intended but ultimately highly burdensome regulations that have come down all the way from Washington that are causing teachers to spend more, and more, and more of their time on paperwork and administration and less and less on figuring out how to build trust and build strong experiences with their students,” said Henderson.

He believes his economic platform also has a shot at transcending party lines. Henderson wants to assist would-be-entrepreneurs and business owners to develop tech and administrative support in town squares across the state.

“There are people today in Dumas, Blytheville, Helena and all over our rural communities that have the work ethic, the inspiration, and the initiative to start a business on the vacant store front on Main Street. What they often lack is technical know-how, relationships, and capital. We can do something about all of that,” said Henderson.” He continued, “Over last 20 years the world has changed underneath our feet. The economy has never been in a period of more rapid and dynamic change than it is right now. So, we need ideas that transcend outdated political debates. That’s what I want to bring to this campaign.”

Henderson also touched on a slate of other issues in an interview with KUAR.

Should Arkansas’s Constitution have civil rights protections based on gender identity and sexual orientation?

“I believe that every human being deserves dignity and respect and that certainly applies to our LGBTQ citizens and I would do everything in my power to make sure that was the case. I think we’re making healthy progress on that as a state…I don’t think at this point I’d go so far as a Constitutional amendment.”

“I hope that eventually in this country this can go from a politically charged issue to one that we can actually discuss in an environment of mutual trust…but I would say as Governor I don’t have any plan and I don’t think the time is right to make that a priority.”

“Abortion should be as rare as we can make it.” Henderson continued, “In cases of rape, incest, health of mother, and early in the pregnancy the decision needs to be made between a woman and her doctor -- family, and her ministers. But I think there’s a lot that can we can do to make abortion rare while still showing love and dignity to all the women that have to make that decision.”

Henderson was born in Little Rock and raised in northwest Arkansas. He graduated from the University of Arkansas with degrees in physics and computer science. He holds masters degrees from Harvard in business administration and public administration. Before entering Teach for America, Henderson spent time as a research scientist at NASA and at the consulting firm McKinsey & Company.

Governor Hutchinson welcomed Henderson's entrance into the race and noted that 2018's election is still a ways away. "I welcome the candidate to the race. I expect that there might be more. This is still somewhat early in terms of the filing period so there very well could be more. I think it's important to take it a step at at a time. It is the political season and I'm not going to take anything for granted. I'm going to work very hard and look forward to getting to know the opponents and what their ideas are."

Jared Henderson is the former executive director of the Arkansas branch of Teach for America. He said Tuesday that he'll seek the party's nomination to challenge the first-term governor.