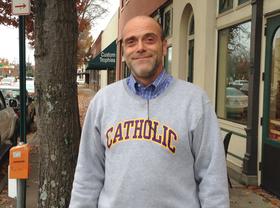 Second District U.S. Congressional hopeful Paul Spencer is characterizing his end of the year fundraising efforts as a vindication of his principles to never take PAC or corporate money for his 2018 election effort. Spencer’s position that only individual donors should contribute to electoral campaigns is not shared by his Democratic primary opponent Gwen Combs or Republican incumbent French Hill.

Spencer’s campaign says it raised $135,000 in the final quarter of 2017 from 2,000 individuals in all seven counties in the central Arkansas district – at an average of $60 per contribution. Spencer says its proof that his message of “rejecting corporate interests” is the way forward for representative politics and governance.

“Our people-powered campaign and its successful fundraising thus far prove that overturning Citizens United, debt-free higher education, and Medicare For All are no longer far-fetched policy goals. Our message of rejecting corporate interests and giving a voice to all working families is clearly the path forward for Democrats if they want to re-establish a political foothold in the South."

In a statement, Spencer went further to say his campaign will not employ political consultants.

“Instead of being funneled to cynical and stale political consultants, every dollar raised this quarter, and every dollar raised throughout this campaign, will go directly into expanding an already established seven-county infrastructure…This includes increasing outreach to rural communities, struggling neighborhoods, and small towns that Democrats had previously assumed to be forever lost to the GOP.”

While Spencer is starting off the New Year with some news, the filing deadline is not until January 31st (check back with us!). Campaign contribution documents for Spencer have not been posted by the Federal Election Commission. Neither Democrat Combs, incumbent Rep. Hill, or Independent Natashia Burch Hulsey have announced fundraising totals through the period yet.

Combs only formally kicked off her candidacy in December and told KUAR that she, unlike Spencer, will take money from certain special interest groups if they align with her political beliefs. Combs maintains she can’t run a competitive campaign without their money. The primary is May 22nd.

"I am not completely opposed to taking money form PACS whose values are closely aligned with mine and whose efforts would not hurt my constituents. I believe that in order to run an effective issue base campaign I have to be open to that. I will not accept any dark money. I’m not happy with the fact that our current member of Congress French Hill is the number one recipient of NRA funding in the House of Representatives. There’s just too much potential there for damage to constituents, possible harm to constituents and I’m not willing to go that route.”

Rep. Hill doesn’t have a primary opponent but has more than $1 million on hand for the general election. He easily trounced his 2016 GOP primary opponent Brock Olree before besting Democrat Dianne Curry by a more than 20 percent margin. Hill was in a three-way GOP primary in 2014 when he defeated former state Rep. Ann Clemmer and Col. Colonel Conrad Reynolds.

Editor's note: This article previously stated campaign finance documents were not on file with the Arkansas Secretary of State's office, rather than the Federal Election Commission.