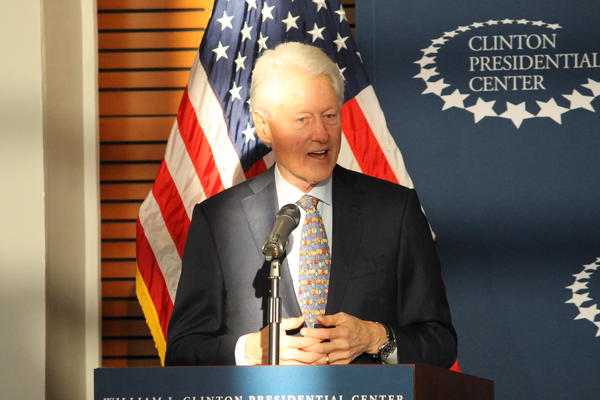 Bill Clinton was known as the rock ‘n’ roll president – the first from a generation that grew up on the music to reach the highest office in the nation. Sunday, he spoke at the Clinton Presidential Center in Little Rock at the opening of a temporary exhibit that looks at the impact rock music has had over the years on politics and social movements. 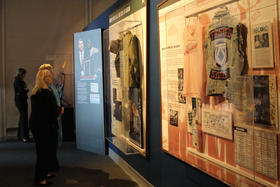 The exhibit, called "Louder than Words: Rock, Power and Politics," opens to the public Monday. It features instruments, stage costumes and other relics from pioneers likes of Chuck Berry, Stevie Wonder and Elvis Presley, through more contemporary performers like Beyoncé and Katy Perry. Also included are hand-written lyrics for iconic songs like Bob Dylan’s "The Times They Are a-Changin’," and Neil Young’s "Rockin’ in the Free World." 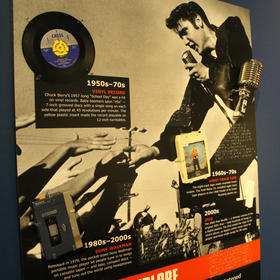 During the reception, former President Clinton recalled how music shaped him as a kid growing up in Hot Springs.

"We didn’t get a TV until I was 10, and I mostly, even after that, did my homework to the radio, and it was always a baseball game or rock ‘n’ roll. I was shameless when I became president in using the office to expose myself to musicians I had always loved. You know, somebody asked me, one of the greatest things about being president, nearly anybody will come play for you," he told the crowd.

Mr. Clinton also noted how the music played a key role during times of societal change.

"Rock ‘n’ roll is about love and loss, and happiness and heartbreak. It’s full of poetry, and its been about politics. As has been said, in the ‘60s there were lots of songs about civil rights and Vietnam, also about the loss of Kennedy and King. ‘Abraham, Martin and John’ is still a beautiful song, still worth listening to. Bob Dylan couldn’t carry a tune, but he could carry a country. Whether his voice was good or bad, he was still a genius always." 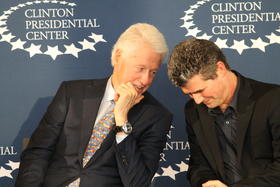 The former president said that even as music has moved beyond his level of appreciation, it continues to resonate with new generations.

"Under the pressure of my daughter, I forced myself to try to understand rap and hip-hop, and that talking could be better than singing if you did it right, and I try to understand all that stuff, but one thing I know: rock ‘n’ roll has given everybody something," Clinton said.

The exhibit is curated by the Rock & Roll Hall of Fame in Cleveland, and the Newseum in Washington, DC, which looks at the history of news media. There are displays reflecting the music during each administration, from President Eisenhower to President Obama. One for President George W. Bush shows the 43rd president walking alongside a peace-flashing Bono of U2. Other displays look at events like the Vietnam War, the fall of the Berlin Wall and censorship. 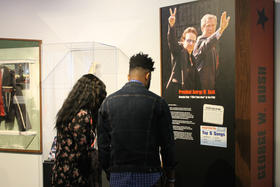 Speaking at Sunday night’s packed reception, Greg Harris, chief executive officer of the Hall of Fame, noted the influence many Arkansans have had on the genre.

"I’m honored to be here in Arkansas, on the music side, the home, birthplace of Johnny Cash, Al Green, Levon Helm of The Band, Charlie Rich, a sax player – Louis Jordan – great, great sax player, and Pharoah Sanders. Think about that convergence of music. You’ve got jump blues, you’ve got rockabilly, you have rock ‘n’ roll, and it all comes together in your state. It’s also the birthplace of one of our 2018 hall of fame inductees, Sister Rosetta Tharpe," Harris said to applause. 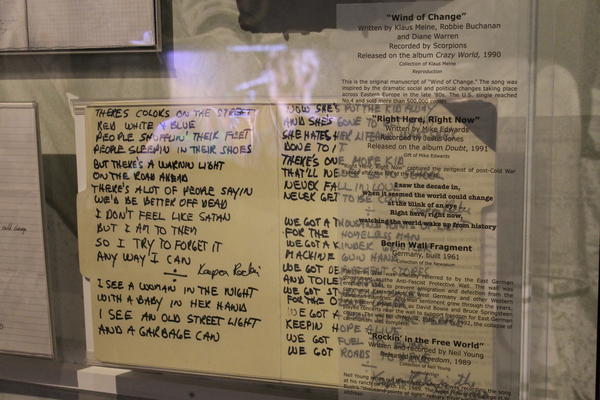 The exhibit will be on display at the Clinton Presidential Center through August 5.