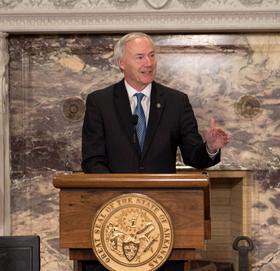 Gov. Asa Hutchinson is suggesting the Arkansas Legislature might be able to wrap up the 2017 session earlier than expected. Wednesday he praised lawmakers for "setting aside peripheral issues" and focusing on important matters.

The Republican governor has seen passage of three key issues he had for this session: a tax cut for low income residents, an exemption of income taxes for the pensions of military retirees and a change to the state’s higher education funding model. Hutchinson's comments came immediately after signing the bill moves funding for public colleges and universities from being based on enrollment to a "performance-based" formula.

"I’m hopeful that the session keeps progressing this way, that there will be an early conclusion to the session," Hutchinson said. "I think we will shift soon from the substantive legislation that we’ve been working on, there’s still some more to do, but we’ll be able to shift to the revenue stabilization act and the preparations for that."

With state revenue below forecast by $57.1 million for the fiscal year that began last July, Hutchinson said he and finance officials are watching carefully to determine if any adjustments are needed to the state budget.