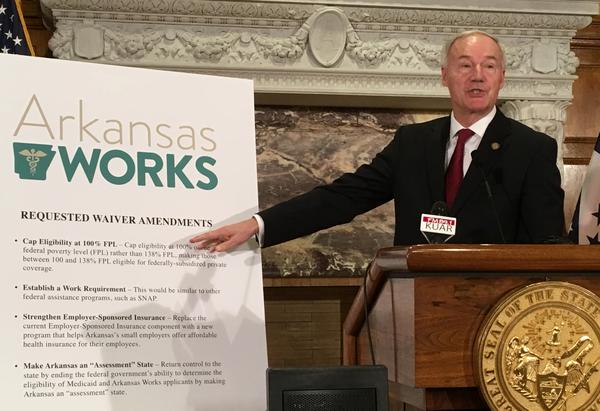 Gov. Asa Hutchinson is asking the Trump Administration for approval to make changes to the Arkansas Works Medicaid expansion program. They include lowering the eligibility cap, which would reduce the number of beneficiaries by about 60,000 people, and adding a work requirement for recipients.

The Republican governor’s announcement came the same day that Republicans in the U.S. House of Representatives released a long-awaited plan to repeal and replace President Barack Obama’s signature healthcare law. Whether that will get the needed support for passage isn’t known yet.

Hutchinson noted during Monday’s press conference the uncertainty about what will happen on the federal level. More than 300,000 Arkansans are on the hybrid program for low income residents, which started in 2013 and is largely funded by federal dollars. The state began paying five percent of the cost this year, which will grow to 10 percent by 2020.

The governor said he decided on the changes after several conversations with Trump Administration officials.

"I’ve talked to them, I’ve tried to get an eye on the tea leaves. We’re presenting our plan to them and all I can say is that what I’m presenting is consistent with the direction that I see the replacement for the Affordable Care Act going forward," Hutchinson said. "So this allows us to get ahead of the curve. It allows us to have a smooth transition into the future."

Cindy Gillespie, director of the Arkansas Department of Human Services, said that once the state’s request is approved, "we will go ahead and send early notifications to the beneficiaries that their plans will be ending as of the end of the year so they have several months heads up."

She said those impacted would be able to move to the federal marketplace where they could keep the same plan or choose a different one.

"We would work with the insurance carriers and the brokers and when we hit open enrollment late in the year, they will be able to work with those individuals to help them sign up," Gillespie said.

The establishment of a work requirement would be similar to other federal assistance programs like the Supplemental Nutritional Assistance Program, Hutchinson said. The requested changes also involve creation of a new program designed to help small employers offer coverage for their employees, and making Arkansas an "assessment" state, which would end the federal government’s ability to determine eligibility of Medicaid and Arkansas Works applicants.

Hutchinson said he spoke Saturday with U.S. Secretary of Health and Human Services Secretary Tom Price who seemed receptive to the changes.

"He indicated that they’re consistent with reform efforts they want to see happen and that they will look favorably on those or they will have it evaluated and considered in a favorable way, even though he certainly cannot make any definitive judgment until he actually sees the waiver and it’s reviewed by counsel and they do the appropriate review there."

The changes would also have to be approved by the Arkansas Legislature. State Senate President Pro Tem Jonathan Dismang said that would likely be considered in a special session after the regular session has been wrapped up to make sure everything is thoroughly vetted.

"We have the general ideas in front of us right now. We’re going to need to see what those specific waiver requirements look for and I think the members expect and want to see that to before they actually take a vote on that," Dismang said.

If approved, the changes would take effect next January.