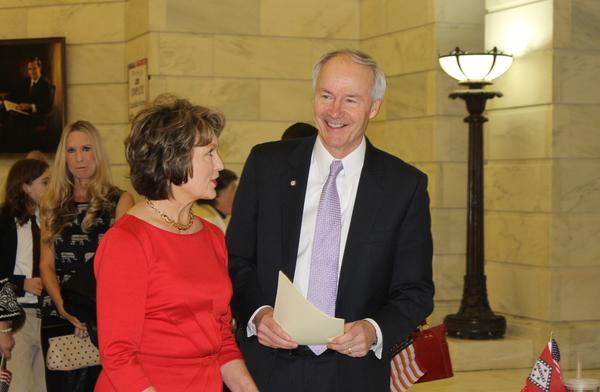 Arkansas Governor Asa Hutchinson made it official Tuesday, announcing that he is seeking a second term in office.

"I wanted to make clear what everybody suspected, I hope, and that is that I’m running for reelection. I’m honored to serve the people of our state. We’ve accomplished a lot," Hutchinson said in an interview with KUAR. "I’ve concentrated on economic development, job creation, had some success there, and want to continue to be able to serve."

The Republican said he has fulfilled four key promises made during the 2014 campaign: creating jobs, championing legislation requiring that computer coding be taught in every public high school, lowering income tax rates by $100 million, and implementing a hiring freeze in state government.

Hutchinson said the time was right to make the announcement as the regular session of the Arkansas General Assembly was formally adjourned earlier this month. More details about what he’d like to do in the future will come at a later date, he said.

"Next year as the campaign heats up and (it gets) closer to the election, then I will announce a more specific vision for the future and the next four years. It’s important that this is not just about what we have done, but where we’re going as a state," Hutchinson said.

A survey of Arkansas voters last month reported 56 percent of respondents approve of the job Hutchinson is doing as governor, with 32 percent disapproving and 12 percent saying they don’t know.

The governor has already taken part in some fundraising, and Roby Brock, host of Talk Business & Politics, believes the announcement could be timed ahead of more such events this summer.

"I suspect he wants to get this word out formally so he can do a little more on the fundraising trail and also just to stave off anybody that might be contemplating a run. We’re about a year out from the primary, so this is probably pretty good timing on his part," Brock said.

While there has been some speculation in political circles, no one has announced their candidacy for governor.

Arkansas has enjoyed record low unemployment rates recently, but one key challenge has been state revenue coming in below forecast. That has had state agency heads having to consider where they would make cuts if necessary.

"Well that’s just an example of how we have to run our state conservatively," Hutchinson said. "We want to make sure we have a balanced budget, and so as the budget gets tight we constrain government spending. We’re doing that, but we’re meeting the obligations that we have in terms of education, we’re investing in that, and our healthcare system, so the state is in good shape."

Another challenge for the governor has been handling the number of people enrolled in the state’s hybrid Medicaid program, which swelled beyond what was projected. Legislation pushed by Hutchinson and approved by the legislature earlier this month shifts 60,000 people off the program and onto the federal marketplace. It also imposes work requirements on recipients.

The state’s changes will have to get federal approval, which is expected after the governor met with Trump Administration officials earlier this year. But it comes amid uncertainty about the federal healthcare program, with the U.S. House of Representatives legislation to repeal and replace the Affordable Care Act, championed by President Obama. The Senate has not acted yet and isn't expected to pass legislation similar to the House version.

"This is the right reform for Arkansas," Hutchinson said, "and I am hopeful and believe that whatever they do in Washington will complement what we’re doing. I’m going to watch it very carefully and we’ll make adjustments as we need to."