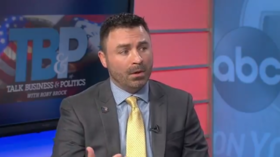 Mark West is throwing his hat in the ring for the race for Arkansas governor. The pastor and business manager out of Batesville filed to run on Monday after being nominated over the weekend at the Libertarian Party of Arkansas’s convention in Little Rock. The governor’s office tops the Libertarian ballot for a number of reasons. Notably, the party’s gubernatorial or presidential candidate has to get three-percent of the vote if it is to retain ballot access in the next election. For the past four election cycles its fallen short of that threshold and had to petition its way on the ballot. West thinks he’ll be the candidate to breakthrough.

In 2012 the party’s presidential nominee Gary Johnson drew 1.52-percent of the vote. In 2014, gubernatorial candidate Frank Gilbert drew 1.92-percent of the vote. And in 2016 Johnson ran again, garnering 2.65-percent of Arkansas’s vote. The Libertarian Party of Arkansas is hoping in-part  to draw votes from down the ballot by fielding more candidates than it ever has before, with 33 office seekers from the state Legislature to the governor’s office.

West says he’s got a message of “government accountability” that’ll resonate with the electorate.

“We are going to run with COST, which is our Committee on Spending and Taxation. We believe that using that we’ll be able to target different agencies where you have duplication or abuse going on, or where there is inappropriateness or unethical behavior going on and we’re going to crack down on that because government should serve the citizens,” said West.