Students and adults in Jonesboro joined the crowds elsewhere in the state and the nation on Saturday for a March for Our Lives protest demanding gun control and other measures to help stop mass shootings, but the Jonesboro rally was also a remembrance of the Westside Middle School shooting exactly 20 years earlier.

Dozens of students and their supporters marched from Jonesboro High School to the courthouse on Saturday as one of some 700 March for Our Lives events taking place around the U.S. and Europe.

Protesters demanded a ban on assault weapons, restrictions on high-capacity magazines and the closing of loopholes that allow individuals who are not generally permitted to purchase guns to do so.

Here's more from the local march from ASU-TV's Alex Brown.

In Jonesboro, the march date coincidentally fell on the 20th anniversary of the Westside Middle School massacre, which killed four young girls and a teacher and was carried out by two students who were 13 and 11 at the time.

“It should have been a wakeup call then,” said Ethan Williams, a student at Arkansas State University.

The students got support from parents and grandparents at the rally. 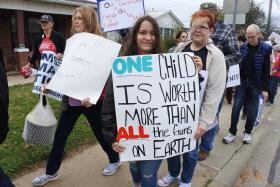 “I’m a gun owner myself and I understand the second amendment but I also understand the rights of people to be able to enjoy their lives without having to suit up in body armor,” said Paragould resident Donnie Huffine.

The rally included a voter registration drive for students who are or soon will be 18 years old.

No counter-protestors showed up for the Jonesboro rally, as they did in other cities.

The shootings occurred 13 months before the massacre at Columbine High School in Littleton, Colorado  that is often called the seminal tragedy in a subcategory of mass shootings that take place at America's schools.

Most recently, 17 students and teachers died at the hands of a gunman inside Marjory Stoneman Douglas High School in Parkland, Florida on Feb. 14.

PHOTOS: Students Make Their Stand At D.C.'s 'March For Our Lives'

Hundreds of thousands of marchers rallied across the United States and around the world Saturday to demand action against gun violence. The "March for Our Lives" protest displayed the resilience behind a new wave of political activism, led by survivors of the Feb. 14 mass shooting at Marjory Stoneman Douglas High School in Parkland, Fla.

For many students, the rallies were their first demonstration for a cause and a social reckoning of what they are capable of. They bundled in the nation's capital, delivering a defiant message: stricter gun regulation.