The Arkansas Supreme Court today overturned a lower court's ruling, and thus, an appointed commission and a state agency may resume rollout of the state's medical marijuana program, stalled since March.

But the court's majority opinion hewed closely to a procedural consideration, and its chief justice appears to be cautioning the Medical Marijuana Commission to re-evaluate its procedures.

The whole scene may end up back in court before long, says one lawyer close to the process.

At issue before the court was Pulaski County Circuit Judge Wendell Griffen's decision in March to stop the commission's selection process, a merit-based ranking of nearly a hundred applicants vying for just five cultivation licenses to grow the state's medical marijuana supply. 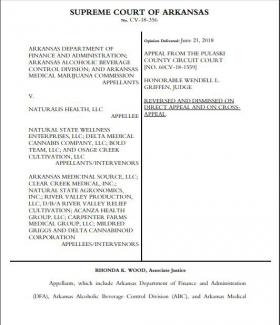 Griffen was ruling on a lawsuit by Naturalis Health, LLC, an applicant that was not one of the five top picks. Griffen was sympathetic, saying there appears to be a conflict of interest between some aspiring business owners and two commission members. Also, the Department of Finance and Administration, responsible for fact-checking the applications, overlooked some errors. Subsequently, one commissioner said he was approached with a bribe, while a report in the Arkansas Democrat-Gazette found that disqualifying errors in at least one application was overlooked in a top-five pick.

Selection of growers to license is the first step toward bringing marijuana product to qualified patients, of which there are now more than 5,400. In February, the commission announced its top five picks. Then in March, Griffin rejected the whole selection process, calling it unconstitutional.

The Supreme Court ruled today that Griffen was wrong to do that but only because the issue was not "ripe," Justice Rhonda Wood wrote for the majority. The licenses were not issued, so the process hadn't yet netted a grievable reward.

"The arguments concerning the denial of the license were not ripe for the circuit court to hear. Because the appellees have not been issued denial letters subsequent to an adjudication, the issue was not ripe; therefore, we reverse."

"It's really very limited," says lawyer Erika Gee, who has watched the process and the litigation closely because she represents several interested business interests, though not Naturalis or any of the top five picks.

"It's a decision on a procedural ground about whether the circuit court had jurisdiction over the case to begin with, and the Supreme Court decided it did not, so it didn't address any of the merits of the case, or the arguments that have been raised by any of the applicants about this decision making process that the commission followed."

In a separate, concurring opinion, Chief Justice Dan Kemp seemed to caution the commission while offering a nod to Judge Griffen.

He said the high court may in the future find against the process, "if the substantial rights of the petitioner have been prejudiced because the administrative findings, inferences, conclusions or decisions are in violation of constitutional provisions or made upon unlawful procedure."

In a declarative finale that could be either helpful or admonishing, Kemp says, "I urge the MMC to review its rules and procedures and to cure any deficiencies."

Gee says it's likely just a matter of time before the selection process does indeed become the issue before the court.

"This decision does not resolve any of the issues that were raised by Naturalis or the other applicants in this case. So I would expect that once there has been an adjudication" — that is, the licenses are awarded — "probably Naturalis and all of these other applicants and maybe some additional ones will file new cases to make those arguments and get a resolution."

Scott Hardin, a spokesman for the Department of Finance and Administration, which oversees the selection process and aids the Medical Marijuana Commission, said the Supreme Court's decision isn't declared final for about two-and-a-half weeks. At that point, "we anticipate action will likely be taken by the Commission (issuing the licenses)," he wrote in a statement.

LITTLE ROCK, Ark. (AP) — The Arkansas Supreme Court on Thursday cleared the way for the state to launch its medical marijuana program, reversing and dismissing a judge's ruling that prevented officials from issuing the first license for businesses to grow the drug.

That would mean money out of the pockets of many early investors such as entrepreneur Brian Teeter.