After hearing about a dozen complaints from farmers, growers and applicators around the state, the Arkansas Agriculture Department has issued a statement urging strict adherence to the label instructions for loyant, a newly-released rice herbicide made by Dow AgroSciences.

State Agriculture Department spokesperson Adriane Barnes said the decision to issue the advisory was made out of concern for soybeans, which are still early in the growing season. 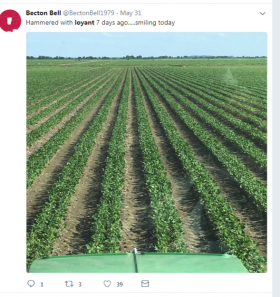 “They appear to be especially sensitive to drift,” she said.

Drift damage occurs when a chemical being applied to one crop on one farm travels downwind to another farm, which may be growing crops that are incompatible with the chemical.

According to Jarrod Hardke, an agronomist with the University of Arkansas’s extension service, any herbicide has the potential to move off-target and cause damage to plants similar to the weeds the herbicide aims to control.

In this case, growing soybeans are similar to the weeds that are frequently seen in early rice crops.

“If enough of that product comes in to contact with that plant, it can cause injury,” he said.

But Hardke said he wouldn’t compare loyant to dicamba, a herbicide made by Monsanto that was banned in Arkansas last year amid hundreds of complaints about drift damage.

“They are very different products,” he said.

Hardke referred to loyant as a “twister and turner,” meaning that it twists itself up into the stems of weeds and interferes with their ability to grow.

On social media, farmers showed before-and-after pictures on how easy it is to sweep up even stubborn weeds that have been treated with loyant days earlier.  Others expressed concern about whether soybeans will prove to be vulnerable to damage, and whether there’s enough time left in the growing season for soybeans to recover.

According to Barnes, growers can help prevent any potential damage by closely following the label instructions for the product.  The instructions specify the temperatures, wind directions and speeds under which it is safe to spray loyant. There are some other chemicals that should not be mixed with loyant.

“We always encourage people to follow the label, but especially in this case,” she said.

Dow Brantley, a farmer in England, Arkansas, said he’s having some success with weed control by spraying loyant both on the ground and from the air, but he agrees with the Agriculture Department’s call for close adherence to the label.

“You have to pay attention to the weather, and the wind, and what other sensitive crops are around you,” he said.

The product is made by Dow AgroSciences, which said that loyant has been successfully applied to hundreds of thousands of acres, delivering exceptional weed control and staying on-target when applied according to the product label.

"We are aware of and have investigated sites where there was alleged off-target movement, which represent only a small percentage of treated acres, and have determined in these cases applications were made outside of label parameters," external communications officer Gregg M. Schmidt said in an email.

Schmidt goes on to say the company supports the efforts the state is making to warn farmers of potential damage.

According to Hardke, loyant use began early in Arkansas when temperatures became hot quickly in late May.  He said loyant works best to control weeds when it’s applied before the permanent flood, which is the growing stage when rice crops have to be fully saturated with water at all times.

“That sort of explains how we went from you hadn’t really heard much about loyant yet and then suddenly you heard a lot about it,” he said.