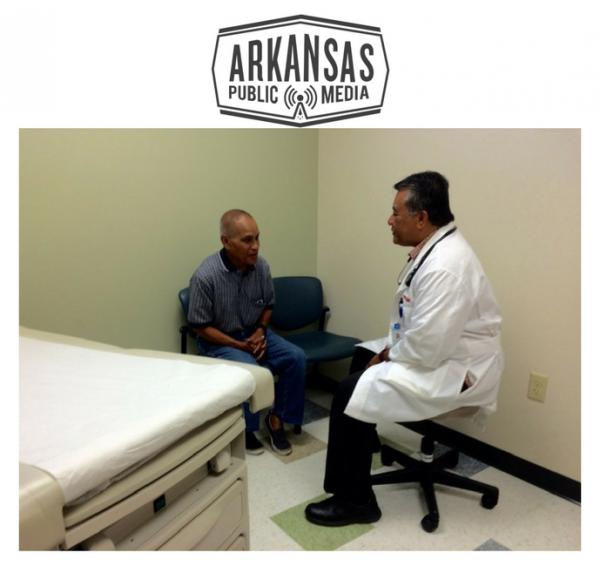 Dr. Sheldon Riklon walks into an examination room inside Community Clinic in Springdale and greets his patient.

"Iakwe," he says, and slides a stool over to Haem Mea, a shy Marshallese elder. The two speak softly to one another for a few moments.

Then he poses this question: So what's it like to have a real Marshallese doctor in town?

Riklon is one of only two U.S. trained Marshallese doctors in the world. He relocated from the Hawaiin islands last year to Northwest Arkansas where the largest population of migrants from the Republic of the Marshall Islands in the world now reside.

Dr. Riklon practices family medicine at Community Clinic, a federally qualified health center which last year served more than 36,000 middle- to low-income patients in Benton and Washington Counties, thousands of them Marshallese. And many of them are really sick.

Haem Mea’s Micronesian ancestors subsisted on fish from the sea, palm fruits and root vegetables, but that indigenous life suddenly changed, Riklon says, when the U.S. took possession of the islands during World War II to conduct weapons tests.

“From 1946 to 1958 when the U.S. detonated 67 atomic nuclear weapons testings, that was equivalent to more than 7,000 Hiroshima-size bombs. So cancers are high, from skin cancer to thyroid cancers, but issues such as diabetes, hypertension and cardiac heart disease is very dependent on nutritional and behavioral issues.”

Marshallese today consume a diet high in fat and rich in processed carbohydrates. Colonization, Riklon says, has also contributed to chronic infectious diseases such as tuberculosis, endemic in the islands. But explaining diagnoses and treatment strategies to islanders who don't speak English and are unaccustomed to routine medical care is challenging, he says.

“To be able to talk in Marshallese and explain things in Marshallese, seeing patients coming in and seeing me, and for them to say what they want to say,” he says, matters.

The Republic of the Marshall Islands, located midway between Hawaii and Australia, is comprised of two coral chains of 28 atolls and five islands spread over 750,000 square miles.

Riklon is from the city of Ebye Island on Kwajalein, a long narrow atoll, which serves as a strategic U.S. military base. 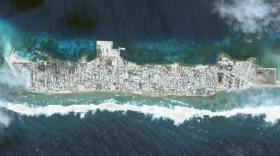 "The ocean is in walking distance on either side," Riklon says.

The doctor spent his childhood swimming in the sea, as well as at his father's knee, a military medical officer and general practitioner, and observing his mom, a registered nurse at work.

Determined to help his people as his parents had, he enrolled in the John A. Burns School of Medicine at the University of Hawaii at Manoa, where he later served as an assistant professor.

Last August he was awarded a distinguished professorship at the University of Arkansas for Medical Sciences.

Spurred on by chronic poverty and a lack of healthcare, as many as 12,000 Marshallese have relocated to Northwest Arkansas, under a U.S. Compact of Free Association. Most islanders labor in poultry slaughterhouses — Tyson Foods, Inc. is headquartered in Springdale  — but decline workplace insurance in order to support families here and back home. 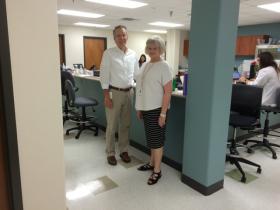 Which is why, says Kathy Grisham, CEO of Community Clinic, her facility treated more than 3,000 Marshallese patients last year. With Dr. Riklon on staff, she says, she expects many more to come through.

The Marshallese live in extended families, in closer proximity than many Americans, and Arkansas health experts have discovered they tend to be private about health concerns. They continue to rely on traditional healing, but with Dr. Riklon on hand, says Dr. Terry Sutterfield, the clinic's medical director, more Marshallese are seeking routine medical care.

“And he’s been very instrumental in being a consult to other medical providers, teaching them about the culture and how they might explain medical conditions to get the acceptance of the patient.” 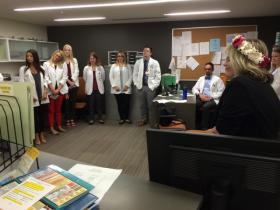 When not seeing patients at Community Clinic, Dr. Riklon can be found in the halls of the University of Arkansas for Medical Sciences Northwest campus in Fayetteville.  UAMS-NW operates a needs referral clinic and the Center for Pacific Islander Health, both in part staffed by Marshallese. The center researches health disparities, disease prevention and management programs, providing cultural competency training for health care providers, community health workers and especially medical students.

“We have inter-professional students working together, in medicine, nursing, and physical therapy," Riklon says, "and they utilize our Marshallese community health workers to see Marshallese diabetic patients.”

Ryan Mahelona, a 4th year medical student, is being advised by Dr. Riklon. 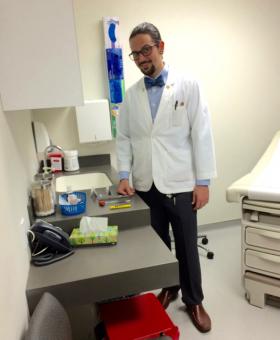 “Dr. Riklon's name is pronounced Rrrrrrikaaloong," Mahelona trills, laughing. “It's neat, seeing him interact with the Marshallese. They have a different communication style. They can stand there and communicate with eyebrow raises, and just a few words.”

Dr. Riklon is also communicating with thousands of Marshallese youth. At UAMS Northwest he recently hosted a seminar for Marshallese high school students hoping to drum up future doctors and nurses. Attaining advanced degrees in any discipline, he says, let alone medicine, is rare back in the islands.

"We have a few young people enrolled at the University of Arkansas in Fayetteville and Northwest Arkansas Community College," he says. "But they require a lot of guidance and counseling. So we are providing that so that they can reach their potential — and realize their dreams."