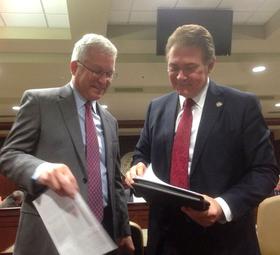 Friday is the last day of open enrollment for signing up for insurance through the Affordable Care Act’s healthcare exchanges, or marketplaces

State officials are predicting more Arkansans to enroll this year than the last -despite efforts by the Trump administration to limit the enrollment period and to curtail outreach and advertisement about its existence.

The exchange has been open since November 1st and closes December 15th. Enrollees can choose between private insurance plans and determine eligibility for federal subsidies, made possible by the ACA.

So far, through the latest enrollment numbers covering through December 9th, more than 32,000 Arkansans have selected insurance plans. Members of the Arkansas Health Insurance Marketplace Board Oversight Subcommittee heard updates on the enrollment process on Thursday. The director of the state’s Health Insurance Marketplace board, Angela Lowther told lawmakers that the actual number is likely much higher.

She said that 32,000 figure doesn’t count those who automatically had their plans renewed. In 2017 just more than 70,000 Arkansans got coverage through the marketplace.

But big unknowns lurk ahead that could shake up those numbers. Governor Asa Hutchinson has asked federal officials for permission to remove 60,000 low-income people from the state’s version of Medicaid expansion. Many of them could wind up on the exchange – which is typically reserved for people making 138 to 400 percent of the poverty level.

State officials also predict that the amount of people enrolled could drop if the Republican Congress gets rid of the ACA’s Individual Mandate – as proposed in tax plans by Arkansas’s U.S. Senator Tom Cotton. The state will a have a final snapshot oopen enrollment numbers at the start of next year.

Dr. Joe Thompson, with the Arkansas Center for Health Improvement told a legislative committee that could make an impact. He noted Arkansas ranks in the top 10 states for federal support and subsidies for coverage and also for the number of people penalized for not signing up for insurance.