Arkansans seeking a medical abortion with the aid of mifepristone or misoprostol will have to find them in another state.

The U.S. Supreme Court’s decision earlier this week not to hear an appeal from Planned Parenthood paves the way for Act 577 of 2015, and conservatives in the state are applauding the court’s decision.

“I think it’s a step in the right direction. Arkansas is a pro-life state, and we will continue to be so,” says state Rep. Andy Mayberry (R-Hensley), president of the Arkansas Right to Life board.

“You know, in the end, this particular piece of legislation, doesn’t prevent abortion. Planned Parenthood simply hasn’t been able to find a doctor willing to contract with those who provide this particular action, and I think that that goes a long way to speaking to the atrocity of the action.”

The law specifically says doctors who provide abortion pills must, at minimum, hold a contract with another physician who had admitting privileges at any state hospital. 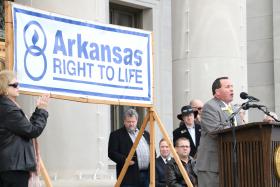 A lawsuit filed soon after the governor signed it into law sent the matter before U.S. District Judge Kristine Baker, who suspended enforcement of the law.

Now the state may enforce it.

“All they’re doing is putting in place all these restrictive measures to make sure all these unintended pregnancies are seen through to a baby being born, and then they’re not following up with SNAP benefits, great public schools, great transportation and affordable childcare for young parents, easily accessible vocational training for these parents with young children …,” she says.

Planned Parenthood has argued that the law doesn’t, as advocates say, regulate a necessary medical standard for such services but simply impede the route women have to abortion access.

State Rep. Charlene Fite (R-Van Buren) authored the Abortion-Inducing Drugs Safety Act. She says women who want to have an abortion should have the same “privileges” she had during a recent medical procedure. 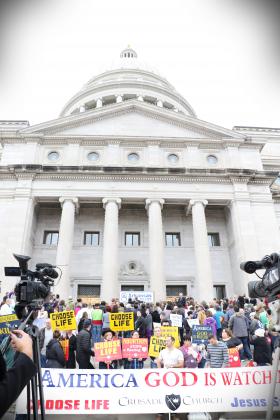 “I had outpatient knee surgery recently, and I certainly wanted to choose a doctor who had admitting privileges to the hospital so that in case anything went wrong … I could be admitted by a physician whom I knew could send my records immediately and follow up with me. And I feel that a woman who has undergone an abortion should have that same privilege.”

In 2017, Fite helped sponsor the state’s Born Alive Infant Protection bill that became law. It says if an abortion results in a living baby “that we would administer anything needed to save that child’s life [because] we’ve had a lot of reports — not in Arkansas necessarily, but in other states — of infants surviving an abortion procedure.”

“So, to that” point about Act 577 being largely about medical standards, “the response is that, this is about access, and you know, pitting clinic against hospital only hurts patients and patients access to what is undeniably safe and legal medication abortion.”

The Supreme Court in 2016 struck down a very similar Texas law. The court this time did not hear arguments over Act 577, and many court watchers say the decision Monday may be more procedural than substantive.

The matter now goes before Baker again for further consideration.

Gov. Asa Hutchinson called the decision “good news for those who are concerned about health and safety" while Attorney General Leslie Rutledge tweeted that she defended the law and applauds Planned Parenthood’s defeat.

But in the long-running abortion contest both here and abroad, celebrations for any one side often keep pace with setbacks for the other, and vice versa. The Supreme Court decision this week comes just days after Ireland voted overwhelmingly to repeal its constitutional prohibition against any and all abortions.

“That is heartening for someone who is a supporter of choice and women’s reproductive justice,” says Hardee.

“I think that after the people who are alive and young and voting age right now were able to see the terrible things that the abortion ban did in Ireland, I think that they are coming out, and they’re voting and, you know, it was a landslide victory to repeal the abortion ban in Ireland and that’s great. That’s a really good indicator of how young people are going to start coming out and voting and helping everyone get better laws and better representation.”

The same solace Hardee took from the international news made the state Right To Life board chairman, Mayberry, disspirited.

“Well, different cultures have different perspectives … it would be my hope and prayer that someday all of the world would understand the value of life beginning at conception. Very sad to me to see what took place in Ireland. When I saw the visual image as well, of people visually dancing in the streets, and laughing, joyous in celebration, it made my heart hurt. To see that what they were celebrating is that they can now legally kill a baby. It’s beyond the scope of what can be recognized as civility to me.”

WASHINGTON (AP) — The Supreme Court is allowing Arkansas to put in effect restrictions on how abortion pills are administered. Critics of a challenged state law say it could effectively end medication abortions in the state.