The Process For Arkansas Governors As Executions Are Carried Out 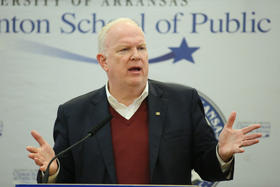 What's it like inside the Arkansas Governor's Mansion as executions are carried out? As the state prepares to resume executions after a 12 year hiatus, with eight inmates scheduled to die by lethal injection this month, KUAR reached out to someone who has inside knowledge.

While courts can certainly intervene, before the execution process begins, the governor is asked by prison officials one final time whether to proceed.

The last time an execution took place in Arkansas was in 2005 when Republican Gov. Mike Huckbeee was in office. His director of policy and communications was Rex Nelson, who spoke during All Things Considered about being with the governor on those nights.

REX NELSON: I was part of the team that was assigned to be with the governor at the mansion. Our chief legal counsel would usually be our point person that would go to the prison where the actual executions took place, but our chief of staff and myself were always with the governor there at the mansion on execution nights. They were awful nights, but unfortunately part of the job here in Arkansas for a governor.

MICHAEL HIBBLEN: And the governor is the last say on an execution, I guess outside of the courts.

NELSON: Absolutely, he is the last say. The way that we would do it in our administration was that we would have an open phone line down to the execution, near the death chamber, and when the officials there would get ready to carry out the execution, actually the head of the state Department of Correction, it was Larry Norris at that time, would come on the line and say, 'Governor we are ready to proceed. Is there anything that could stop this?' And so literally, the governor does have the last word. I mean, there have been so many movies through the years about a governor on the phone and so forth, but in Arkansas the reality is a lot like those old movies. You're actually holding an open phone line down to the prison.

HIBBLEN: What would the governor at that time, Governor Huckabee... were there any last minute issues that he would actually consider?

NELSON: Actually, we would have all of the files there on that case in case there was anything needed during that time. Those of us with the governor, and the governor would usually after dinner just sit very quietly and read those files and contemplate what was happening, and it was always just a very solemn, very, very quiet time at the governor's mansion on those nights. And the governor would say 'go ahead,' but you know, things can happen. We actually had a federal court stay issued on the night of a scheduled triple execution at one point, and then that was appealed immediately to the justice on duty for the Supreme Court, which was Clarence Thomas, I remember on that particular night, and the execution was actually carried out on that night. But there are obviously multiple things that can happen so you need legal staff in place; you need others in place with the governor in case things do happen at the last moment.

HIBBLEN: And many of the executions that Governor Huckabee carried out were multiple executions and that gets a lot of attention from around the world because it is so unusual. Any thoughts or recollections about the challenges or the mindset of carrying out many executions in one evening?

NELSON: I can tell you, whether it's a single, whether it's a double, whether it's a triple, and we had all three during the Huckabee administration, there is nothing easy about it. And I don't care if you philosophically support the death penalty, philosophically oppose the death penalty, they are awful nights. They were absolutely the worst part of my job in the 10 years that I spent in the governor's office; there's not even a close second. It was part of my job to be with him (Governor Huckabee), I knew it was hard on the governor also, it was hard on all of us who were there, but it was again, part of the job that you had to do, but there was nothing fun about it. Those were nights that you very much dreaded as a member of the governor's staff if you were on that team either at the prison or with him at the mansion.

LITTLE ROCK, Ark. (AP) — Arkansas' parole board is suggesting that Gov. Asa Hutchinson extend mercy to one of eight inmates scheduled to die in a series of double-executions this month.

The Republican governor is not bound by the board's recommendation Wednesday that he spare Jason McGehee's life. The 40-year-old inmate was convicted of killing a teenager who had told police about a theft ring operating in far northern Arkansas.