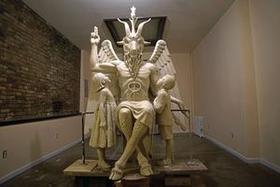 A proposal to erect a satanic monument on the Arkansas state Capitol grounds has advanced to a public hearing.

A subcommittee of the state Capitol Arts and Grounds Commission on Wednesday cleared the proposal by the Satanic Temple to build a Baphomet statue. A date has not been set for the public hearing, but a spokeswoman said it'll likely be held after this year's legislative session.

The proposal was made in response to a privately funded Ten Commandments monument lawmakers approved last year. A public hearing was held last month on that proposal, but a date has not been set for the commission to vote on the Ten Commandments display.

The Baphomet proposal would still need to be authorized by the Legislature even if it's approved by the commission.

LITTLE ROCK, Ark. (AP) — Opponents of an effort to build a Ten Commandments monument near Arkansas' Capitol urged a panel to reject the statue on grounds that it could bring lawsuits, while the lawmaker behind the display said Wednesday that the only decision remaining is where to install it.

The privately funded monument is, by law, allowed to be on Capitol grounds. But the Capitol Arts and Grounds Commission must issue its recommendation on the monument's location and design to Secretary of State Mark Martin before he can approve it.