The state's two leading constitutional office holders — Gov. Asa Hutchinson and Attorney General Leslie Rutledge — have had very different springs. Both face re-election contests in November, but only one has a GOP primary challenge May 22.

That may explain why he was on his knees, hands cupping an amphibian, waiting for the start of a toad race at the annual Toad Suck Daze in Conway.

"They're all different," he said afterward, not about the toad race but the community events a politician makes in order to grab hands and win nods. "You go to the [Hope] Watermelon Festival, the [Johnson County] Peach Festival. Every community event has similarities, but they're different. This one is unique."

Hutchinson is facing a Republican primary opponent not unlike the one four years ago. He wasn’t governor then, but he faced a challenger in Curtis Coleman who charged that he, not Hutchinson, was the true conservative. 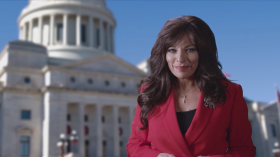 This time it’s Hot Springs gun range owner Jan Morgan who first gained headlines four years ago when she declared her business closed to Muslims. Like Coleman, she hasn’t held elected office, but she bears the soul of a true conservative, she says.

"First, we must identify, expose and replace politicians who ran as Republicans to get into office, then once in office, began to legislate like Democrats to please a progressive governor," she says in an 11-minute campaign video online.

Morgan’s campaign ignored a request for an interview, but someone associated with the campaign — Bob Bailey of Pope County — agreed to one. 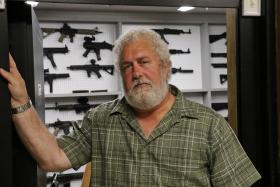 Bailey has been helping Morgan distribute signs in his county and on Thursday facilitated a campaign stop at his church. They're both in the business of firearms (he is a gun engraver among other things). And he ran a short-lived political campaign for state senate.

"For someone to say they’re a conservative, and yet vote for Arkansas Works, which is just renamed Obamacare, which is a scam, the more you read into it ...," Bailey says.

He believes the difference in their primary contest — he lost by roughly 800, or 55 to 45 percent — can be explained by crossover voting, or what's also called strategic voting: votes from district residents who are not or would not identify as Republicans. (Davis now faces Democrat Teresa Gallegos May 22 for the seat.) 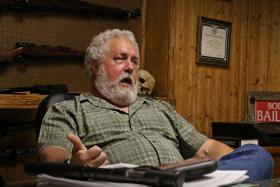 "I’ve been told that we actually won the Republican vote. But, and I don’t think it was so much my opponent as it was the people supporting her, and the governor invoking the whole Democratic party to show up and swing the primary ...," he says.

Senate District 16 is reliably Republican. In a special election in 2015, three Republicans faced off in the primary while Democrats did not even field a candidate in the general election.

At the polls, Bailey says, "we started seeing swarms of cars come in with 'Greenpeace' and 'Save the whales' and 'Bernie for President' and 'Hillary for President' and rainbow stickers and unicorn stickers … when they got out of the car, you can tell you know, 'hey, that one’s a liberal right there,' when you got three or four rings hanging out your nose and ears and lips and chains … most people I know don’t look like that."

Janine Parry is a political scientist at the University of Arkansas in Fayetteville, and she's not sold on strategic voting as either a widespread or effective alternative to earnest democratic choices.

"Statistically, it's hard to orchestrate human behavior," she says. "Even the savviest, most interested voters have to give up a lot [when they crossover]. They have to have certainty that their [preferred] candidate really doesn't have a chance; then they have to strongly consider giving up their options to express preference on their side of things in, gosh, dozens of other races!

"So they have to care about this single race and this nomination that's happening far more than they care about the others, and that's a lot to ask, even for a good many sophisticated voters."

But not for some Fayetteville voters.

A progressive political and social group called For Fayetteville put out an e-mail blast Wednesday encouraging voters in House District 86 to pick up a Democratic ballot this primary season and vote for Fayetteville City Councilman Mark Kinion, but all other voters in the area should vote in the Republican primary despite their party affiliation because Jan Morgan "is simply terrifying."

For Fayetteville members should "hedge" their preferences in the general election for governor in November by voting for the incumbent, Hutchinson, in the primary. 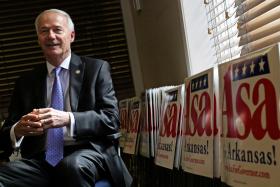 "Incumbent Republican Governor Asa Hutchinson agrees with For Fayetteville on next to nothing. We oppose Asa’s efforts to raise regressive grocery taxes while giving tax cuts to the richest.  We wish he’d vetoed the unconstitutional Act 137 which preempts our local Civil Rights Ordinance and which our Fayetteville City Attorney is now challenging in the courts.  But at least he's occasionally been there to put out the dumpster fires created by a single party legislative supermajority and to spare us from unmitigated national embarrassment."

Parry points out that one problem with strategic voting is that "hedge" voters and party "raiders" often work at cross purposes.

In this race, for instance, Morgan is generally considered the weaker of the two Republican primary choices in a general election. She's not held political office and is politically to the right of the incumbent Hutchinson, who himself is to the right of every other announced gubernatorial candidate but Morgan. So Democrats "hedging" their expected general election loss to a Republican will pick Hutchinson, the more moderate Republican, but those who would "raid" the primary will pick Morgan, expecting her to fair worst against a moderate Democrat.

"It's exceptionally hard to demonstrate" strategic voting happens, or happens with any efficacy, Parry says, but she pointed out there is a sound study published by a University of Arkansas alumnae, Sunshine Hillygus, that looked at the 2008 presidential election and found evidence of both positive and negative strategic voting in that primary.

"It's still subtle, but their conclusions were, under the right conditions in certain states with really savvy voters in high profile elections, it could happen with enough people to make a difference.

"But most of the time it doesn't. It's just something insiders talk about, and a few people probably do engage in it but not in a way that affects meaningful outcomes."

THE ELEPHANT IN THE STATE

Arkansas is a state with blue atolls — Pulaski County, Fayetteville, Crittenden County — in an otherwise red sea. One way for left-leaning voices to be heard is to pick up a Republican primary ballot. Another way is being forged by Robb Ryerse. 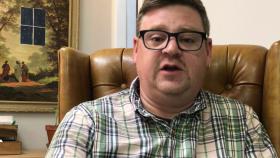 Ryerse is a lifelong Republican, he says. He's a nondenominational Christian minister and a political neopthye. He's a primary challenger in the state's 3rd congressional district squaring off against incumbent and heavy favorite Steve Womack, who recently told the Arkansas Democrat-Gazette that "there's really no point" in even acknowledging he has an opponent in Ryerse [pron. RYE-er-see], who isn't a Republican, he charged.

If Morgan is a challenge to Hutchinson from the right, Ryerse is a bid to unseat Womack from the left. Ryerse supports a federal $15 minimum wage law and Medicare For All. He’s looking forward to the same benefits of an open primary that Bob Bailey says cost him the nomination.

"There are not a ton of Democratic primaries in our district, so I can definitely see there being Independents and Democrats who see this as an opportunity to defeat Congressman Womack, and maybe the best opportunity to defeat Congressman Womack, and want to lend their voice to that, to go ahead and vote in the Republican primary on May 22, and frankly I would welcome their support."

Back at Toad Suck Daze, Hutchinson was asked if in this primary race he’d considered soliciting the endorsement of Curtis Coleman, his Morgan-esque challenger four years ago.

"I haven’t. He sent me a very nice note during my tenure and just said I was doing a good job. So he’s a very thoughtful man, and I’d love to reconnect with him."