A crowd of perhaps 200 supporters, protesters and counter-protesters gathered Thursday in front of the Arkansas Capitol for the unveiling of the much-publicized Baphomet statue.

The statue is the showpiece of a group calling itself The Satanic Temple. It’s reportedly about 8 feet tall and bronze. Baphomet is a pagan or occult idol; this one is pictured seated before a little boy and a little girl bearing curious, eager expressions.

Most in the crowd were there to celebrate free speech and diversity, but many who sweltered on the sidewalk — the area is wholly exposed to the sun; it was humid and 95 degrees — were there to oppose the Satanic. 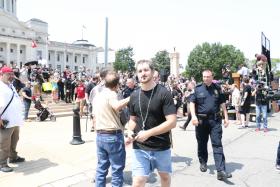 “You are a liar, you are a hypocrite, and you know nothing of the ways of God,” yelled a black-masked protester, interrupting Chad Jones, a Conway minister and representative of the Arkansas Progressive Christians, who was speaking from a flatbed truck on which sat the statue.

The man was escorted away by Capitol Police officers, one of whom said, “Let them have their rally.”

Organizers say the goat-faced representation exists simply to protest the state of Arkansas’s installation of a Ten Commandments monument on the grounds earlier this summer. 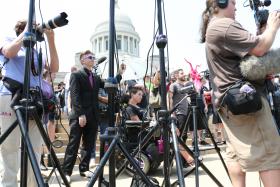 A man who later identified himself as the head of the Springfield, Missouri chapter of The Satanic Temple, and who asked not to be named in order to protect his "privacy and safety," seemed a little surprised it's gone this far.

“Actually, this is the first event like this our particular group has attended,” he said. “We’re here for inclusion, and we hope we get it.”

No one spoken to by Arkansas Public Media said they actually worship Satan.

“Well, technically, Satan is not a lord or a deity. He is an idea. A symbol,” said Emilie Bell of Conway, who took the occasion to pass out free cookies and advertise her business, Lulu’s Dark Delights. “It’s not worshipping a lord. It’s worshipping a way of life, and that’s what I’m here for.” 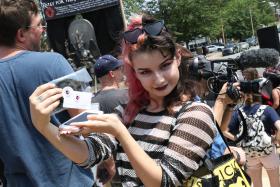 Malcolm Monstrum came all the way from San Antonio, and he dressed as a medieval knight — a “Knight of Baphomet,” he said.

“I’m here for the separation of church and state.”

“It’s obviously an ironic protest,” said Holly Wermann. “That’s the whole point of it. You know, I’m not a Satanist." She added that if Christians get the 10 Commandmenta, "they [The Satanic Temple] get one, too.” 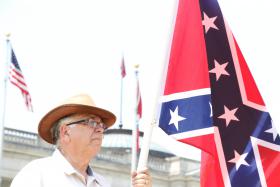 One of those standing between Baphomet and the Capitol with a Confederate battle flag was Thom Robb, the national director of the Knights Party of the Ku Klux Klan.

“Well, we came here because of the Satanists having their demonstration. So we came out here, not as a protest, but just as a witness. Stand as a silent witness for our Christian faith and Christian nation.”

Robb was joined in protest by Justin Lee from Brinkley who offered a Christian sermon by way of a handheld microphone and wireless speaker. 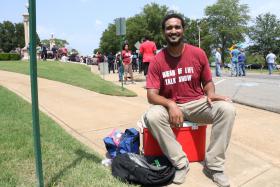 Lee called the statue and profile of The Satanic Temple “obscene.”

“We came to stand for God, stand for Jesus Christ. Too many times we allow people to twist the Bill of Rights.”

In the end, the Baphomet was ushered away on the back of a flatbed truck. 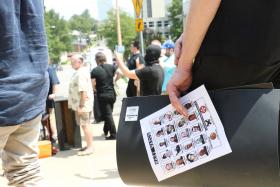 A permanent seat on the Capitol grounds would require approval from the state Legislature.

State Sen. Jason Rapert, who’s credited with bringing the 10 Commandments monument to its place on the Capitol grounds, said in a press release “it will be a cold day in hell” before that happens.

CORRECTION: An earlier version of this story incorrectly identified a man at the rally who subsequently asked not to be identified.

This story is produced by Arkansas Public Media. What's that? APM is a nonprofit journalism project for all of Arkansas and a collaboration among public media in the state. We're funded in part through a grant from the Corporation for Public Broadcasting, with the support of partner stations KUAR, KUAF, KASU and KTXK. And, we hope, from you!