The news of Steven Dishman’s arrest last summer invited comparisons to a well-known Hollywood fiction, that of Dr. Richard Kimble, “The Fugitive,” a man fingered for the monstrous murder of his wife who borrows time as an escapee to hunt the real killer.

“He’s been on the run for 32 years, basically playing the old Richard Kimble part,” says lifelong friend Dennis Dablemont of Springdale, where Dishman was raised. “Just eluding the police, and he’s right underneath their noses.”

But Dishman, unlike Richard Kimball, isn’t innocent of committing a heinous crime. He’s guilty. Guilty of burglarizing The Original Muskrat Roadhouse and Saloon in 1979.

And he isn’t seeking justice. He was just lying low.

Listen
Listening...
/
Listen to the full interview with Steven Dishman on April 17, 2018.

Last summer authorities in Springdale raided the home of Shirley Jones, his octogenarian mother, and arrested Dishman, then 60.

By then, folks knew him as Ken Anderson. He’d escaped from the Arkansas prison system in 1985, from the Benton Work Release Center, and ran up the railroad tracks to Conway. At first he lived as a homeless man, eventually gaining unsteady and eclectic work that paid him under the table. After a few years, he met a woman named Debbie, who eventually let him move in. He lived with her for about 27 years, according to a state police report.

Today, Dishman is housed at the Ouachita River Unit of the Arkansas Department of Corrections, a unit that specializes in medically infirm and special needs inmates. He agreed to an interview with Arkansas Public Media but, he said, he’s a little self-conscious about his speech. Dishman says he had a brain tumor removed in a hospital operation that subsequently led to a staph infection that’s left him paralyzed on the right side of his body.

“He lived in Conway there for several years, and had they wanted to get him they could’ve got him any time,” says Dablemont. “Then when you find out the soap opera story about getting the tumor and getting paralyzed, and the whole story of the Springdale police swooping in and capturing a 32-year fugitive, well the guy’s half paralyzed! His face is hanging down. He doesn’t have use of one side of his body. ... So it’s hardly one of these ‘We’ve captured Arkansas’s most wanted fugitive.”

Six years ago Dishman — as Ken Anderson — received a brain operation at the University of Arkansas for Medical Sciences, according to Dablemont and Dishman. A spokeswoman for the hospital said she couldn’t confirm this under the Health Insurance Portability and Accountability Act.

“He thinks he’s going to sue UAMS when he gets out of jail, for what’s happened to him,” Dablemont says. “I thought, good luck with that one! I mean, how did you get an operation under an alias name anyway?”

“I mean, change the channel, it’s intermission time — craziest story you ever heard!” 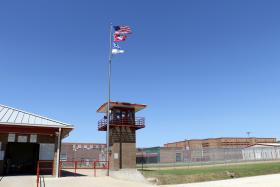 In 1985, less than a year into a seven-year sentence, Dishman was assigned to a work detail in the city of Benton. He was still a prisoner of the state, but he worked days at a construction site in Benton.

“I didn’t like it. I didn’t like it. They had me — and I liked the job — they had me pouring concrete slabs at a construction site for ADM. Heavy trucks. And I picked up, and I was worried about going back to Springdale where all my problems originated, … so I took off. They brought me to work one morning and I took off.

“I jumped a chainlink fence, and I walked early that morning off the job site, down the street, and I followed the railroad tracks all the way to Conway.

It was early enough in the workday that the supervisor who would have rung an alarm hadn’t clocked in. If his fellow inmates saw it, they kept mum long enough for him to get the necessary headstart.

He got into unlocked recreational vehicles — “I never broke into them. I always found them unlocked.” — where he found clothing and supplies. 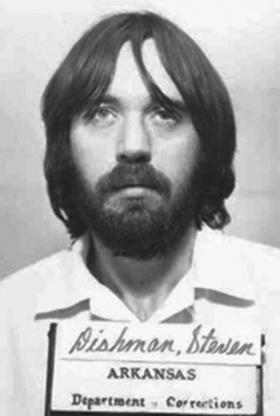 “I wouldn’t do it today. I wouldn’t do a lot of things today. 1985 was basically back in the stone age. No cell phones, no computers. Uh, they had [a photo of] me on TV, from walking off a job site … but after that it was good to go. But you remember then, [local] TV news only lasted for 30 mins.”

In his 1984 mugshot Dishman has hair below his eyebrows and over his ears, and a full beard. It was easy to cut his hair and shave his beard and sufficiently change his appearance. He also lived a very quiet existence and avoided behavior that would attract authorities of any kind.

“You oughtta hear some of his stories of being in a vehicle when a police officer pulls somebody over and asks for ID’s, and how he’s managed to get by for 32 years,” Dablemont says.

Dishman never tried to obtain a drivers license, or a job that couldn’t be paid under-the-table. 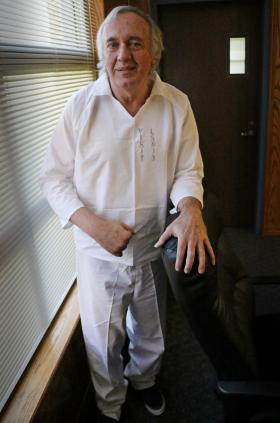 He picked “Anderson” because he loved the classic TV show “Father Knows Best,” and Ken because it’s short and simple and bland.

He painted houses and laid floor tile and washed and detailed cars, he said.

“We knew a whole squad [of police officers] for a good many years. We knew cops. No, not one time” did anyone suspect him.

According to a state police report, it was Debbie — her name is redacted in reports, but Dishman and others used this name — who alerted authorities in the spring of last year. The couple had separated. Dishman returned to live with his elderly mother.

He says he walked away from the relationship in order to give Debbie space to pursue a new relationship that offered her stepchildren and a family. 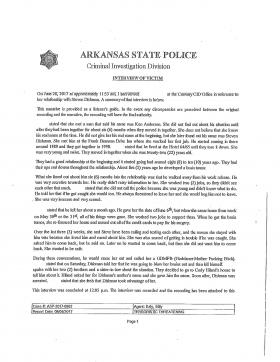 “She had a friend who was interested in her, and been married once before, had two kids, ages 10 to 7, boys, and basically [I] walked away from our relationships so she could have that. I gave up my cat, my home, my friends, my truck, my girlfriend, so she could have it. Plus, my health wasn’t doing too good.”

Police investigators and the Faulkner County Prosecutor’s Office say the breakup was more fraught for Debbie than all that. A state police report made last summer says Dishman, after the breakup, threatened to kill her, and himself.

“Yes, I hated the reasons. I hated all of that, but I was happy to have him back. Because that’s the only child I have,” mother Shirley Jones said by phone. “Do you have any children? … Ok, consider yourself lucky then in a way.”

It was Debbie who, after more than a quarter-century with Ken Anderson, finally gave him up, but she asked authorities not to seek additional charges against him for threatening her life. 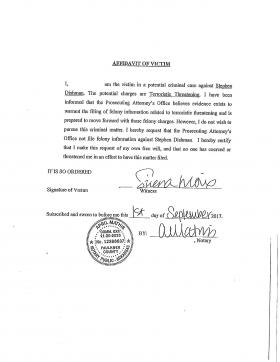 According to authorities, Dishman threatened Debbie for years that if she outted him she would go down, too, for sheltering a known fugitive. He denies that.

According to the Department of Corrections, Dishman is eligible for parole in one year. His lawyer, James Evans Jr. of Springdale, said he’s petitioning the parole board for an early release given Dishman’s poor health, his time served and good behavior.

Meanwhile, the Saline County Prosecutor, who could charge Dishman for walking away from the Benton Work Release in 1985, won’t pursue that charge.

“This story splashed worldwide. I mean, you’ll go back and look at the online news break fo this, you’d think he was Richard Kimble himself!” says Dablemont. “It’s just amazing how the media can put such a spin on something and not know the facts.

This story is produced by Arkansas Public Media. What's that? APM is a nonprofit journalism project for all of Arkansas and a collaboration among public media in the state. We're funded in part through a grant from the Corporation for Public Broadcasting, with the support of partner stations KUAR, KUAF, KASU and KTXK. And, we hope, from you!