Student Journalists Give VA Good Grade, But Veteran Homelessness, Suicide Cause For Alarm

Prompted by the Phoenix scandal three years ago, a team of journalism professors and students at the University of Arkansas took a hard look at the Veterans Health Care System of the Ozarks, and they're giving it a good grade.

But the semester-long investigation does highlight two devastating trends surrounding veterans' and their quality of life.

As part of an ongoing collaboration, students and professors in the Walter J. Lemke Department of Journalism have teamed up with Arkansas Public Media and partner radio station KUAF to publish a series of reports and broadcast the findings.

About a dozen students and four professors comprised the 2017 Digital Media Lab, and its original reporting is here.

While taking an investigative look at the Veterans Health Care System of the Ozarks, students and professors alighted on two trends outside the system that merited attention — the unusually high rate of suicide among Arkansas vets, and homelessness.

On a day last week he sipped coffee from a paper cup and waited to use the restroom inside the Seven Hills Homeless Center in Fayetteville. He's not homeless, he says, but "kind of couch surfing with friends right now."

Nearly a decade ago, Leonard was an Army National Guard human resources specialist, he says. Today, he's missing his front teeth, struggling with mental health issues  — "It's mainly when I lay my head down at night to sleep [and] everything overwhelms me a little bit" — and not unfamiliar with suicidal behavior.

"I mean, I stay with a buddy who works at a gas station, and he's got a little van with a bed in the back, and I'll sleep out there while he's working."

A beautiful hospital awaits him just an hour's march north up Highway 71, at the Veterans Health Care System of the Ozarks, but he’s not ready for that yet. 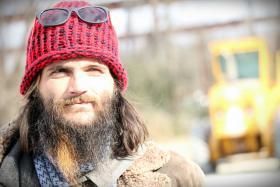 "Well, I mean, I consider myself young and able bodied," he says — the care should go to someone who really needs it.

Besides, "the VA has too many stipulations, you know? They try to get too much of a foothold into my personal life, and I don’t want them asking questions or anything like that."

Over the fall, the a dozen student journalists and four veteran journalism professors wanted to see how the VA system in northwest Arkansa was working since the 2014 Phoenix scandal, where vets weren’t getting seen for care in a timely manner, if at all, and administrators falsified records. 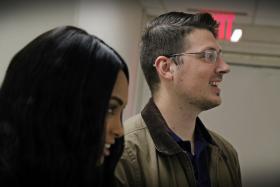 "I mean, veterans need to know that their hospital in their own backyard is doing its job," says Alex Nicoll, a member of the Digital Media Lab and editor of the University of Arkansas newspaper, the Traveler, "because that could influence them going to Little Rock, Oklahoma City, Memphis, somewhere else to seek help."

Since President Barack Obama signed the Veterans Access, Choice and Accountability Act of 2014, veterans have the option to seek care in the private sector — on the government's dime. But Nicoll says the research and data his team has done suggest they'll receive better care, quicker, at the Fayetteville VA.

Reporter Lindsey Guimont said some of the best anecdotal data was mined at the American Legion, on Wednesdays,  over lunch. 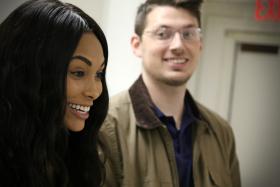 “They’ll tell us about how they feel about the VA, how they felt about, well, they'll even bring up suicide. One man sat there and cried while I was talking to him, and that showed me — these people are passionate about what they do.”

Guimont co-wrote the Lab’s story on suicide while her peers explored the specific needs of female veterans, music therapy, homelessness and other issues.

Homelessness in Northwest Arkansas has more than doubled in just the last seven years — roughly the same period the federal Department of Veteran's Affairs said it was going to end homelessness among military veterans nationwide . 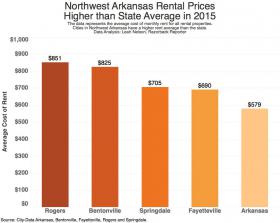 The project took a look at available living units in the region and price and found that both had gone up steadily in northwest Arkansas.

The other trend that merited reporting inside and outside the VA is suicide. For the entire state of Arkansas, vets are killing themselves 25 percent more than the national average, and if they’re young, 18-34, it’s 60 percent higher.

Maureen Cover-Bryan is the daughter of a career soldier, and the mother of a veteran who died by suicide six years ago. To her, outreach for veterans, whether that’s VA benefits or suicide intervention, is a top national priority. Simply, they deserve it.

Back to Robert Leonard — he says he has mental health issues, and the military was not the place for him, though he stuck it out for three years.

Listen
Listening...
/
Veteran Robert Leonard, 28, recalls the brutal beating of another soldier during a field training exercise while he was in the Army National Guard.

"They don’t have the right regard for human life that everybody should have."

He claims to have witnessed his fellow soldiers kill another soldier who couldn't follow the program.

He says he's tried twice to kill himself, once by running into oncoming traffic. It caused a big accident. 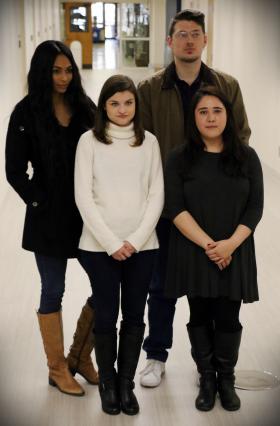 Still, he's stayed away from the VA.

Reporter Alex Nicoll says in the course of his reporting he had occasion to visit with a veteran he grew to respect a great deal, but the veteran would only meet him in a Walmart parking lot, in his car — and then, his hands fidgeted the whole time.

"I tried everything to do everything I could to, you know, to ease the tension, ease the pressure on him, everything I could. He picked up on it, and he was like, 'It's not you. It's just something I'm going through.' ... Seeing a veteran, you know, we have this idea of the big, tough, strong, always have their life together, and actually seeing a veteran struggling with something so personally, that vulnerability ... it was nice to see the humanity." 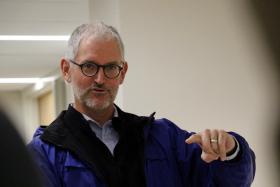 This is at least the third semester-long, data-centered journalism project Wells has finished alongside students. In 2018, he expects to team up with fellow professor and narrative journalist Bret Schulte for a deep look at Northwest Arkansas's working poor.

CORRECTION: Lindsey Guimont co-wrote the Lab's story on suicide. An earlier version of this story misstated the subject of her report.

Seated in the middle of a crowded room, David King, a homeless Army veteran, belted out lyrics to a gospel song.

“Oh God, you're not done with me yet,” he sang from the song “Redeemed” by Big Daddy Weave. “I am redeemed. You set me free.”

Between their bites of hot dogs and chocolate chip cookies, other homeless patrons at the Seven Hills (or 7hills) Homeless Center in Fayetteville shouted at him to be quiet, but King continued. King, 54, is one of at least 195 homeless veterans in Fayetteville, where the number of homeless vets has grown 34 percent (from 146) in 2015, according to data provided by the Community and Family Institute at the University of Arkansas.