An anonymous scientific survey conducted on the University of Arkansas-Fayetteville campus to measure the incidence of nonconsensual sexual contact revealed that 31 percent of women sampled reported being victims. Such contact includes campus rapes and sexual assaults as well as unwanted sexual touching.

The survey was conducted at the urging of an Arkansas legislator raising awareness about widespread sexual violence on college campuses, and that Arkansas is among more than a dozen states that do not teach comprehensive sex education in public schools — including what constitutes sexual consent.

Further illuminating the widely-reported UA survey, a female student who claims she was sexually assaulted carried around a bed sheet for weeks, raising alarm.

Kristen Jozkowski, an associate professor of public health in the College of Education and Health Professions at the University of Arkansas, investigates and researches the spectrum of human sexuality, from desire and pleasure to sexual consent and violence.

Several years ago, Jozkowski met state Rep. Greg Leding (D-Fayetteville) at a northwest Arkansas forum on sexual violence. Leding asked Jozkowski if she could provide data on the incidence of sexual assault on the Fayetteville campus which lies within his district.

“I conducted an online anonymous survey administered to students through a number of general elective courses to get a diverse sample,” Jozkowksi says.

The validated standardized survey was conducted in the autumn of 2017. After discarding rogue responses, a thousand responses were tabulated.

Incidents occurred both on and off campus, an environment, Jozkowski says, where frequent parties and intoxication occurs, which is a risk factor.

Jozkowski says the culture has traditionally not held men accountable for sexual violence, but that’s changing with the rise of the #MeToo movement: women coming forward to report sexual assault in sport, entertainment and in the workplace.

The UA survey, however, revealed most women who experienced nonconsensual sexual contact failed to report it.

“And there are reasons for that,” Jozkowski says. “College women experience sexual assault in higher rates during their first year on campus, at a time where students are trying to fit in, make friends, and they don’t want to call attention to themselves in a negative way. They also might not know how to report incidents, or what channels to go through.” 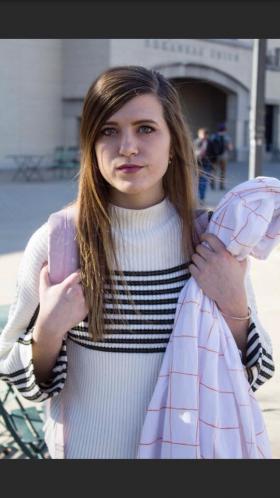 UA sophomore Gillian Gullett, an International and Latin American studies student, says it took her a week to finally report that she had been raped by a male student. She first contacted a UA mental health hotline, next a local rape crisis center, then university police. She was told because the alleged incident occured off campus, she would have to contact Fayetteville police. Instead, Gullett decided to file a formal complaint through the UA's Title IX portal. Publicly funded colleges under a federal law known as Title IX are required to respond and remedy sexual violence complaints.

"When I clicked to start, it said 'page not found,'" Gullett said in an April interview with public radio station KUAF-91.3 FM.

Gullett says she had to resort to personally emailing a campus Title IX authority to arrange an appointment.

“There’s a psychological phenomenon that I’ve learned about since all this happened called ‘second rape.’ It’s the premise that what you go through afterwards and the way it’s responded to and handled is much more traumatic than the actual event itself.”

This past April, during Sexual Assault Awareness Month, Gullett carried an orange-striped bed sheet around campus, part of her social network campaign “Don't Keep It Under Cover” to end the stigma that surrounds speaking out about sexual assault.

Gullet says she discovered that she is among the one in four college women who report surviving rape or attempted rape at some point in their lifetime, according to anonymous reports on multi-campus surveys sampling thousands of college students nationwide — a statistic not widely taught to high school girls as they prepare for their college entrance exams.

During her month-long campaign, Gullett also pressured the university to provide more resources to sexual assault survivors and a fairer process for victims under Title IX.

In response to Gullett’s radio interview, the University of Arkansas issued a formal statement asserting it is committed to creating an environment free from sexual harassment or acts of sexual violence, saying a “Report a Concern” link appears at the bottom of the university's main web pages.

The university says it employs a full-time Title IX coordinator and a team of Title IX investigators to respond to all reported incidents, on campus or off. The UA says it is also working to strengthen outreach, training and resources for reporting, and prevention programs related to sexual assault, sexual harassment, domestic violence, dating violence and stalking.

“And I was pleased to see the conversation turn toward comprehensive sexuality education at younger ages,” she says, “because by the time you get on college campuses, it’s almost too late to address this issue.” 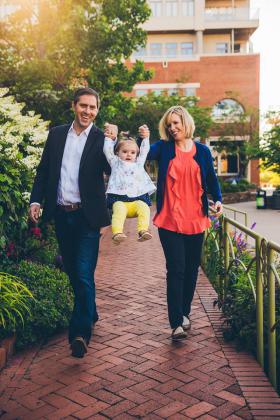 Leding, who co-chairs the subcommittee, says the survey results are alarming.

“There were a few statistics that jumped out at me,” he says. “Nearly a quarter of people reported two or more sexual assaults, and the same number reported two or more perpetrators. And I was not surprised to learn that more people had not reported their assaults to the Fayetteville police or UA police department, a sign of a very big problem.”

According to the most recent UA campus safety report, released last October, only five rape cases were reported to local authorities in 2016, 7 in 2015, and 3 in 2014.

Jozkowski says the dearth of reporting can be linked to fear of authority, along with fear of being ostracized by peers.

Leding, who’s running for Arkansas Senate District 4 this mid-term election, hopes sexual violence on Arkansas college campuses will be taken up during the 2019 Arkansas General Assembly.

“We had a couple of Republican lawmakers address that at our meeting, suggesting we cannot wait to address this issue,” he says. “We need to be teaching and talking about this at a much earlier age.”

Legislation for sex education falls under the jurisdiction of states. Arkansas is one of 14 that do not mandate sex education as part of public school health curricula, although abstinence is widely taught.

“Sex education teaches how to have healthy relationships, communication, and promotion of self esteem,” Jozkowski says. “It also teaches students how to have safe sex, and what constitutes consent.”

Jozkowski says by the time Arkansas students enroll in college, a majority are already sexually active.