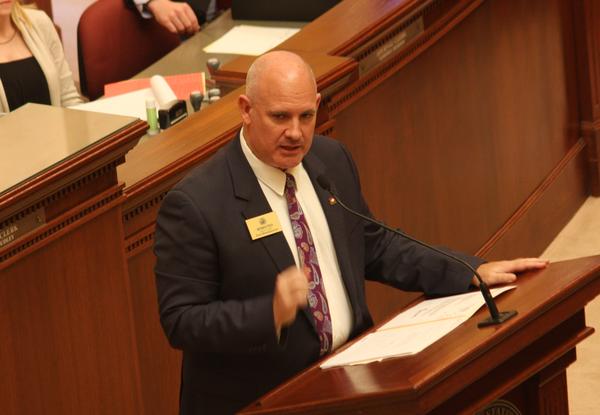 Gov. Asa Hutchinson’s $50 million tax cut plan won approval Monday in the Arkansas House and Senate. But a final vote is needed before the legislation heads to the governor’s desk for signature.

Speaking on behalf of the bill in his chamber, Sen. Jim Hendren, Republican-Gravette, said the plan would save money for nearly 660,000 low income Arkansans.

The Senate approved the bill 33-0.

A short time later an identical bill was taken up in the House, getting a brief statement from Rep. Mathew Pitsch, Republican-Fort Smith.

"We're sent here to do the best we can for the citizens of Arkansas. This tax bill gets 1,346,000 Arkansans a tax cut in the last 25 months. I would appreciate a good vote," Pitsch said, incorporating those impacted by his bill and the governor's tax cut passed two years ago for middle income tax payers.

The House approved it 90-to-two, with five voting present.

Some Republicans wanted deeper tax cuts. To win their support, the proposal includes creation of a 16-member legislative task force that would recommend comprehensive tax code changes by the fall of 2018.

A vote on a competing $40 million tax credit proposal from Democratic Rep. Warwick Sabin of Little Rock was delayed Monday. He has been pushing for a state Earned Income Tax Credit and has said the governor's plan and his could work well together.

A $50 million income tax cut plan for low-earning Arkansans, initially proposed by Gov. Asa Hutchinson, advanced out of a state Senate panel on Wednesday. The Senate Committee on Revenue and Taxation, consisting of five Republicans and three Democrats, passed the measure with no dissenting voices or votes. The bill would cut taxes for people making below $20,999 annually.

Republican Senate Majority Leader Jim Hendren of Gravette, who’s also the Governor’s nephew, is the lead sponsor. He said the plan would affect about 657,000 people.

The Senate Revenue and Taxation Committee on Wednesday endorsed the Republican governor's proposal to cut income taxes for those making less than $21,000 a year. The legislation would also form a task force to recommend further tax cuts before the 2019 legislative session.