The Arkansas Supreme Court heard oral arguments Thursday concerning Fayetteville’s anti-discrimination ordinance which includes protections for sexual orientation and gender identity. Justices questioned whether the city ordinance, passed by voters there in September 2015, conflicts with a state law passed earlier that year which bans cities and counties from enacting protections not contained in the state's civil rights law.

Washington County Circuit Judge Doug Martin upheld the city's ordinance in March 2016, ruling that laws regarding bullying and domestic violence could also be applied to ordinances like the one approved in Fayetteville.  That ruling was debated Thursday before the state's high court, with arguments pivoting on what constitutes an existing protected class in the state constitution. 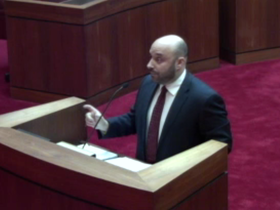 Arkansas Solicitor General Lee Rudofsky said the law was designed to provide consistent standards which is best for business. He argued the city ordinance clearly conflicts with the state law.

"The city's interpretation of the act, however, would neuter it, leaving the act unable to require statewide uniformity and unable to prevent a patchwork of varying laws in the 500-plus localities in Arkansas. That interpretation, adopted by the circuit court below is plain wrong," Rudofsky said. "The plain meaning of the act is that localities cannot prevent different discrimination protections than the state has chosen to provide."

Fayetteville City Attorney Kit Williams argued justices should not weigh in on whether the state law is constitutional since that wasn't addressed in the circuit court's ruling. 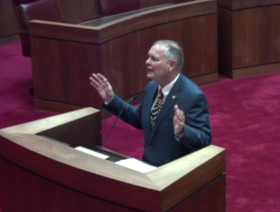 "I'm not here to argue the constitutionality of this particular statute because it's not properly before you," Williams said. "This is a vital issue in this state. This issue is not going to go away."

While questioning Williams, Associate Justice Rhonda Wood said there was no ambiguity in the state law.

The law was passed by the Arkansas Legislature in February 2015. At the time Gov. Asa Hutchinson raised concerns that it was infringing on local control, but didn't veto the bill. He also didn't sign the bill, allowing it to automatically become law after a five-day window.

Arkansas is one of three states that have enacted state laws banning non-discrimination ordinances at the local level. The others are North Carolina and Tennessee.

LITTLE ROCK, Ark. (AP) — Arkansas Supreme Court justices have questioned whether a city's ordinance banning discrimination based on sexual orientation or gender identity flies in the face of a 2015 state law that was intended to prevent local LGBT protections.