The Midwest is full of hedge trees. These are trees planted by homesteaders along property lines to help corral cattle. This was before barbed wire became popular. Hedge trees usually have hard, rot-resistant wood which can prove valuable beyond the tree's use as a border. They also usually have fruit long regarded as a nuisance. Now some farmers are eyeing the fruit as a cash crop. Iowa Public Radio's Lindsey Moon explains.

LINDSEY MOON, BYLINE: Osage oranges, hedge apples, horse apples, monkey brains - these are synonymous for the fruit that falls from the hedge tree. If you don't live in the rural Midwest, you may have seen them in craft stores. Their softball-sized and usually lime green. Sometimes they're used for decorating. They look a bit like human brains, and folklore says that they keep spiders away if you bring them inside. But the fruit is inedible, and most farmers consider them a pain. As Doug Schock scours his pasture in a green John Deere ATV, he explains.

DOUG SCHOCK: You tripped over them, and then they got mushy (laughter). And they were just another job - pick up the hedge apples around the barn lot. And you really didn't want the cattle to eat them and choke on them.

MOON: Schock lives on a 300-acre farm here in Bloomfield, Ia., just north of the Missouri border. Like many farmers, he's got hundreds and hundreds of hedge trees on his property. They grow to be up to 60 feet tall and have thorny branches that'll poke you if you get too close.

SCHOCK: I've seen some up to 4 pounds. And you'd never want to get hit on the head with a 4-pounder. That'll put a knot on your noggin.

MOON: Wearing a black baseball helmet and a pair of khaki Carhartt coveralls, he's gathered at least 7 tons of hedge apples so far this year. Todd Johnson is a chemist from Burlington, Ia., and his company, Osage Health Care, is buying all the hedge apples it can source.

TODD JOHNSON: This was a family story of folklore meets science. So my great uncle Don Privo told us stories about how if they would cut open hedge apples and rub them on scrapes, that it would heal the cuts. And since then, I've read a little bit that the Osage Indians also believed the same properties were present.

MOON: When Johnson investigated his uncle's story, he found research suggesting that the seeds of the hedge fruit may have some anti-inflammatory properties. He's devised a way to extract the seeds and is pressing them to make a pricy cosmetic oil called pomifera. It's currently in vogue with makeup artists in New York City and selling for $85 per half ounce. So Johnson is paying $180 a ton for hedge balls. Because the fruit has long been considered useless, Gene Duis, who runs the local grain elevator, at first thought all this was a joke. He usually thinks in bushels. He's run the numbers a few times now.

MOON: By Duis' math, the locals are getting more money for the junk fruit that has traditionally been left in a ditch than they are getting for their corn crop and all the expense that goes into growing and harvesting it. Meanwhile, chemist Todd Johnson has been looking to buy 300 tons of hedge fruit this year. And if pomifera keeps selling like it has, he says he'll need 2,000 tons next fall, all for something that was in a field to rot. For NPR News, I'm Lindsey Moon. Transcript provided by NPR, Copyright NPR. Lindsey Moon
Lindsey Moon joined Wisconsin Public Radio in Madison as the Lee Ester News Fellow in August 2012. She comes to WPR from Iowa Public Radio where she was a reporter/producer working on both investigative reporting projects and the network's two locally produced daily talk programs. She is a contributor to the Iowa Center for Public Affairs Journalism and is interested in health issues, sustainability, as well as arts and culture.
See stories by Lindsey Moon 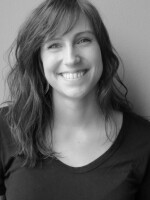 Lindsey Moon
Lindsey Moon started as a talk show producer with Iowa Public Radio in May of 2014. She comes to IPR by way of Illinois Public Media, an NPR/PBS dual licensee in Champaign-Urbana, Illinois, and Wisconsin Public Radio where she’s worked as a producer and a general assignment reporter.