THANK YOU!! Around 5% remaining to raise in $45K KASU Fall Fund Drive. Become a sustainer today at $5/mo. Give through the KASU Mobile App or CLICK HERE.

Quilters Across The U.S. Answer Call To Help Sew Up Unfinished Project

Whenever Shannon Downey comes across an unfinished craft project at an estate sale, she feels compelled to buy and finish it.

"Ninety-nine percent of the time it's an unfinished pillow or just a small hoop," Downey said.

But earlier this fall, Downey stumbled across an unfinished quilt of the United States at an estate sale on Chicago's North Side. She immediately knew this project was different.

"I just sat down and I started shaking my head and my friends were standing around and they were like, 'Oh dear.' I was like, 'This feels much bigger than any of the other ones!'"

The bin was filled with hexagons of white fabric and a pattern for a large quilt of each state along with some stars. A few hexagons were already embroidered with the outline of a state, along with that state's bird and flower. Alaska and Georgia were finished. New Jersey was halfway done.

The project was started by Rita Smith, a 99-year-old woman who died earlier this year.

Downey's known on Instagram for blending art and activism under the name Badass Cross Stitch. Her friends are used to her buying these unfinished projects at estate sales. But she knew she couldn't do this project alone, so she put a call out on Instagram.

She needed nearly 100 women to embroider each state hexagon and the stars. The response was overwhelming. Women from across the country wanted to help. Some participants researched Smith and found out she was a nurse and avid crafter. They even found her high school yearbook photo. Whenever someone had a question, Downey thought about what Smith would want.

"This is her art and we're just the hands," Downey said.

After Downey received the embroidered hexagons, she organized a modern day quilting bee at a crafting workshop called Wishcraft, carrying out a long tradition of women getting together to sew and quilt. Women came from all over the Midwest this past Saturday to help.

Downey said she's frustrated that society doesn't place the same kind of value in crafting, whether it's embroidery, quilting or sewing, as people do in other types of art. She feels like a lot of that is because these skills are considered "women's work."

When she attended Smith's estate sale, Downey purchased another completed map of the United States that Rita had embroidered. It sold for $5.

"That gutted me," she said, knowing the time and effort that went into the piece.

This weekend, as some women sat and chatted, hunched over pieces of fabric, Downey's theory played out in real time.

"My work isn't worth somebody finishing when I die," said Hannah Allen, who lives in Chicago but grew up in Kentucky and stitched the Kentucky hexagon.

"But maybe it is," interjected another sewer, Tiffany Quade. She drove down from Minnesota and stitched that state's hexagon. "Maybe that's the whole point! Maybe Rita felt the same way too."

"This goes to a point of underappreciation of women's work and we're kind of told our work isn't worth anything,"she said.

"We underappreciate ourselves then," Quade said.

As the day crept along and the women connected more and more pieces, Downey gathered them around.

"Rita is resting in craft's peace because this is going to be done and it's going to be done in a really epic way," Downey said. "Rita was just a normal person and we're just normal people. It's wildly honorable and worth there being artifact and story and memory around. So, yay, Rita!"

The woman, of varying ages and backgrounds, stood around and applauded. "Thank you, Rita!" some of the shouted!

Seven hours after they started, the last stitches were put in place. The remaining stitchers stood in a circle, each holding an edge of the quilt top, nearly 8 by 9 feet. They admired their handiwork and the skill of so many other women, including Rita, whose embroidery is now mixed in with others. In the middle of the hexagons, the women put Rita's completed map of the United States that Downey had also purchased at the estate sale.

In the coming weeks , a professional quilter will put the filling and back on the quilt. Afterwards, people across the country will have a chance to see the quilt themselves. On Dec. 21, it will be displayed in Chicago at a local gallery called Women Made, before moving on to the National Quilting Museum in Paducah, Ky., in March.

Kate McGee
Kate is the education reporter at KUT, covering the Austin Independent School District, public, and higher education in Texas. She got her public radio start at Fordham University's WFUV. Her voice has been heard on the East and West coasts as a reporter and producer for WNYC and KUNR in Reno, Nevada. She has also appeared on NPR's Morning Edition,   All Things Considered, The Takeaway and more. In her spare time, Kate enjoys discovering new music, traveling and trying local beers.
See stories by Kate McGee 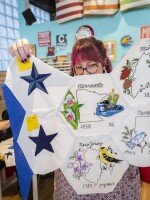 Kate McGee
Kate McGee covers higher education for the WBEZ Education Desk. She joined WBEZ in May 2018 after spending a year at WAMU, the NPR affiliate in Washington D.C. There, she broke a major story that revealed D.C. Public Schools were awarding diplomas to underprepared students in violation of their own policies. Born in New York City and raised in New Jersey, Kate got her public radio start at Fordham University’s WFUV. She covered education at KUT, the NPR affiliate in Austin, Texas, where she was named Texas Associated Press Radio Reporter of the Year in 2015. She’s also worked at WNYC and KUNR in Reno, Nevada. Kate’s work has appeared on NPR’s Morning Edition, All Things Considered, Here and Now, and The Takeaway. She enjoys road trips, going to baseball games, buying books she doesn’t have time to read, and drinking a good beer outdoors.