Education & Technology
Local and Regional Headlines
Here is where you can find news about Jonesboro, Craighead County, and Arkansas at large, as well as news for Missouri and Tennessee.

Megan Prettyman says wanted to be a teacher from a young age. She loves learning. She loves history. She said she jumped at every opportunity to tutor and help teach her fellow classmates when she was a student in Fayetteville Public Schools.

“No one was surprised when I said I wanted to be a history teacher,” Prettyman said.

While she was studying for a history degree at Hendrix College, Prettyman says she began to realize how lucky she was to have a great education.

But like many teachers, Prettyman struggles to get by.

During a special session of the Arkansas Legislature this month, Republican leadership said there wasn’t support among members for consideration of proposals to raise minimum salaries. While Democrats wanted to introduce legislation, they lacked the two-thirds support to introduce topics outside of Gov. Asa Hutchinson’s calls for the session.

Prettyman has been an educator in the Little Rock School District for six years, first at McClellan High School, now as an 8th-grade social studies teacher at Little Rock West High School of Innovation. She also works as the secretary for Little Rock Education Association, which is the local teacher’s union.

“It's a draining profession,” Prettyman said. “So if you don't have some sort of love for the job or the kids, it's not something you're going to last in long.”

Prettyman says the problem isn't just low pay, but the amount of unpaid work she does as a teacher. She is contracted to work from 7:55 a.m. to 3:10 p.m., but says if she only did work during those hours her “classes wouldn't happen.”

This year she teaches three different subjects and needs separate prep time for each. She loses an extra unpaid hour per class each week to prep. On top of planning time, Prettyman says she spends unpaid hours grading and working on different school leadership committees. In the few minutes she has between classes, Prettyman has to “reset” the classroom. That involves moving all the chairs back to their proper places, making sure paper is restocked and sharpening her spare pencils.

In addition to the time challenges, Prettyman has to be ready to go virtual and shift to online classes if another COVID-19 outbreak were to happen. She also regularly goes through “stressful” mass shooting drills.

Prettyman says many people outside of the profession don’t understand the challenges she and other teachers are facing.

“There are so many people who think they know what it is to be an educator because they were once a student, but they have never actually taught.”

Prettyman says she thinks about choosing a different profession “all the time.” She is engaged to be married and looks forward to starting a family of her own. Prettyman said she wonders if she will be able to maintain the work-life balance with children and the time constraints of teaching.

She has had colleagues leave Arkansas to become teachers in Colorado and Texas where the pay is higher. Prettyman says if she was paid better she would still question her choice to teach, but thinks she would do it less.

“In that process of becoming a teacher, what is your why? Why are you here? Very clearly we’re not here for the pay. You have to find something to keep you going.”

Prettyman says there are rewarding moments as a teacher that make the challenges of the profession worth it. The first time a student understands something they have been struggling with is an example she points to.

“That feeling is so incredible,” Prettyman said. “Being able to be that for someone is one of the reasons I haven't left education when there have been many times I was very close.” 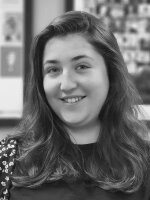