That would mean money out of the pockets of many early investors such as entrepreneur Brian Teeter.

Today, Teeter is paying $1,500 a month for a retail space in west Hot Springs that he doesn’t even have keys for. A space whose only value to him is as an item in his application before the Commission for a marijuana dispensary license.

“You know, our specific location was a video store. I mean, up until last summer, it was still operating. Maybe sort of the last video store in existence! They even still had VHS tapes.”

What makes the space valuable to him isn’t just that it’s in a relatively visible spot, adjacent a dollar store and across the street from a Tractor Supply Co. The real value is that, according to Teeter, it’s at least 1,500 feet from any school, daycare or church — a necessary setback for any would-be store.

That Teeter would cough up $1,500 each month for a vacant retail spot unnerves even him, a serial start-up businessman. On the other hand, Teeter expects to spend as much as $1.5 million just to get his business running, before sustained profitability, even. 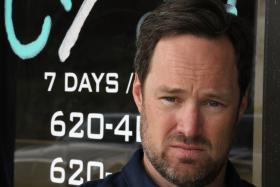 “A question that we don’t know the answer to is, what happens if they do process it and we no longer have access to that location?. What happens? Do they come back to us and say, ‘Hey, you have 30 days?’ Or, ‘Sorry, we’re going to have to throw out your application on the technicality that you no longer have the address specified.”

And Teeter has contracted with a lawyer, Erika Gee, a partner and regulatory specialist at Wright, Lindsey, Jennings, LLP in Little Rock.

“There’s really no way to predict what’s on the horizon, or how long it might take,” she says, and dispensary applicants are at an even greater loss than the cultivation applicants and the process currently in dispute.

“If they switch to a third-party grading sort of situation, or if they switch to a lottery, is that going to require them to submit new applications, even though they have already spent in some cases a year and hundreds of thousands of dollars to prepare?”

What’s worse, the state and its future marijuana businesses are almost certainly in for more litigation and uncertainty going forward.

“I think you will see more litigation no matter what happens because there isn’t a way to resolve the present circumstances without upsetting one group or another. Even if the Supreme Court completely disagrees with Judge Griffen. If they completely disagree, complete agree, or have some sort of mixed bag [opinion], there is going to be a group of people who are unhappy with that resolution.”

“All we can assume,” Teeter says, “is we better have this location when our application is processed.”

Teeter thought he’d know the first of the year whether or not he’d won one of the state’s 32 licenses to retail medical marijuana. He’s been paying month-to-month, he says, and without a longterm lease.

“I as a renter don’t want to enter into a three- or five-year commercial agreement, which is standard, on something I don’t even know is going to exist!”

But because of the setback restrictions and the nature of this new business, he can’t expect just any site or landlord to comport with his needs. He’s vulnerable, he says.

The landlord “could come back to me and ask for a longterm lease … and the rent rate higher than what we talked about. So I’m really in a weak position to negotiate right now.”

Teeter is one of perhaps hundreds of Arkansans — there were 95 applicants for a cultivation license and 227 for dispensary licenses, according to the Department of Finance and Administration — for whom the delayed implementation of the business of medical marijuana is money out of their pockets. 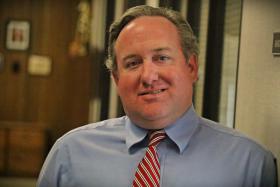 “There is extreme frustration, from the applicant side of it to the patient side,” says Scott Hardin with the Department of Finance and Administration, the agency that coordinates and aids the Medical Marijuana Commission.

One of the plans, early on, was to pick licenses by lottery. Department lawyers liked this because it’s perfectly random — an end run around allegations of selection bias or tampering. But the public spoke out mostly against it, and the Commission subsequently picked the merit-based scoring system now in dispute.

“I think it’s safe to say had we done a lottery system, we’d likely have a dispensary probably on Main Street in operation today,” Hardin says.

Today, the Department is hoping the state Supreme Court will offer some direction forward, not just for the process of picking cultivation licenses that’s in dispute but the retail license applications that have yet to be scored.

Because “this is going to create jobs,” he says. “If you just look at it simply right off the top — we’re going to have 32 dispensaries. Assume each dispensary hires 10 people, well, that’s 320 jobs. I certainly don’t want to take anything away from this as an economic driver around the state because it will. I mean, you saw the New York Times came to Cotton Plant to do a story simply on the economic impact.”

The town of Cotton Plant, with just a few hundred residents in Woodruff County, was the proposed site of one of the winning cultivation licenses. 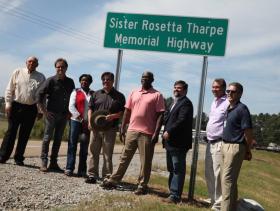 Ryland’s measure of economic development is so modest that he says he’s in regular communication with Dollar General. No, a store like that would not precipitate a spike in employment, but right now he says there are residents with retail jobs in Forrest City, Searcy, even Little Rock, some 75 miles away.

“This community was dying, and it needs to be restored. That was my campaign motto — change through restoration.”

Asked what he would say if he could make an argument before the state Supreme Court today, he says he would make a plea for mercy, and kept promises.

“I would ask them for mercy. Basically only God can give mercy. Man most of the time don’t think about mercy. But here we are a community that needs it, and the criteria set up for the Medical Marijuana Commission was intended to help communities like Cotton Plant. The scoring process, the highest points were generated in order to help communities like Cotton Plant. People in the Delta have suffered enough.”

Back near the bypass in west Hot Springs, Brian Teeter says this nascent industry is like the Wild West — and it’s going to take that frontier spirit, and a settling patience.

“In some regard we’re prospectors. We’re those guys that go West in the covered wagon train, and we’re trying to find something out there.”

Medical marijuana--will it ever launch in Arkansas?  Last week, Pulaski County Circuit Judge Wendell Griffen went further than many thought after his temporary restraining order turned into a ‘null and void’ declaration on the state’s process for awarding 5 cultivation facilities.  Attorney General Leslie Rutledge says she’ll appeal, but the ruling has brought chaos to what was already a bit of a chaotic process for medical marijuana.  John Brummet, columnist with the Arkansas Democrat-Gazette, discusses this news with Roby Brock of Talk Business.

A March 21 ruling by Pulaski County Circuit Court Judge Wendell Griffen that essentially halted the implementation of medical marijuana use in Arkansas has been appealed to the Arkansas Supreme Court by Attorney General Leslie Rutledge. It is not certain when the court will take up the case.