Societal Issues
Local and Regional Headlines
Here is where you can find news about Jonesboro, Craighead County, and Arkansas at large, as well as news for Missouri and Tennessee.

A program that ensures that thousands of Arkansas children have health coverage turns 25 this week.

The Children's Health Insurance Program (CHIP) is a federal-state partnership that covers children when parents can't afford private health insurance. It's known in Arkansas as ARKids First and covers more than 70,000 children.

For families who qualify, said Loretta Alexander, health policy director at Arkansas Advocates for Children and Families, CHIP has been a lifesaver.

"It means that a lot of children that would not be covered - and their parents wouldn't have the opportunity to have insurance for their children to live healthy lives and thrive as they would - they would not have the coverage that they have now," she said.

The uninsured rate for children in Arkansas decreased between 2008 and 2016 to 4%, Alexander said, but a more recent report shows the number of uninsured children in the state has been on the rise again.

Alexander credited the Public Health Emergency, declared by the federal government, for keeping people insured during the pandemic. The extra money provided to states, and a requirement that no one be dropped from Medicaid, means more Arkansans have been covered. She said poverty plays a big role in kids lacking insurance, but CHIP has established itself as a successful piece of legislation that consistently has provided coverage for many in Arkansas.

"It reduces the uninsured rate for children," she said. "It helps families to maintain their economic stability, because we know that medical emergencies are very expensive. And its continuous coverage keeps kids enrolled."

The Public Health Emergency is set to expire Oct. 13, but Alexander said going into fall, it could be extended if there's an increase in flu and COVID cases. 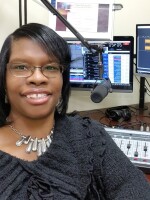 Danielle Smith
Danielle M. Smith is an award-winning radio journalist/personality with more than a decade of experience in broadcast media. Smith is a former audio journalist with American Urban Radio Networks and Sheridan Broadcasting Networks. She is currently joining PNS as a producer. She also hosts a weekly community affairs show “Good News” on Power 1360 WGBN AM 1360 & 98.9FM in Pittsburgh, PA. Smith sits on the Communications board for the Functional Literacy Ministry of Haiti 501 ©(3). Smith recently took a leap of faith and relocated to Nashville TN.
See stories by Danielle Smith
KASU thanks our supporter
Latest Stories
KASU thanks our supporter
KASU thanks our supporter