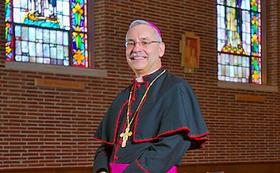 This weekend the Arkansas Capitol building will be the site of two rallies with two very different messages. Those in support of reproductive rights and a larger progressive presence in the 2018 elections plan to be at the Capitol Saturday. While those seeking to end abortion are set to rally Sunday – minus Roman Catholic Bishop Anthony Taylor.

The first demonstration on Saturday, is the follow-up to last year’s well-attended Women’s March. It was in large part a reaction to the election of President Donald Trump. Dozens of women allege the former casino owner and reality TV star sexually assaulted them. He’s also bragged about it in an Access Hollywood tape. The rally may now be bolstered by the #metoo movement as well. This event, styled March on the Polls 2018 will walk from West Capitol and South Pulaski streets to the state Capitol building. There they’ll join up with the 8th Annual Rally for Reproductive Justice.

Then the very next day expect a crowd to support an opposite viewpoint. The March for Life takes place Sunday, which calls for an end to abortion. Arkansas Attorney General Leslie Rutledge is its keynote speaker. But her support for the death penalty has drawn a stiff rebuke from a normally steadfast fixture of the anti-abortion movement. Bishop Anthony Taylor announced he will not participate this year due to Rutledge’s support of the death penalty. The state put four men to death this year and attempted to kill eight in 11 days before courts intervened.

The Arkansas Catholic newspaper notes the rally is organized by Arkansas Right to Life but was founded 40 years ago with the help of Bishop Andrew McDonald. Bishop Taylor says he asked for a new speaker but was “refused.” Taylor wrote, “the Church teaches…human life and human dignity must be protected from the first moment of conception to natural death and every stage in between” and that “even people who have been sentenced to death posses this dignity, which is why capital punishment must be abolished.”

The 2 p.m. march traditionally follows the Mass for Life held at noon. In a letter Bishop Taylor acknowledge many in his church will still attend the march, and reminded his flock that Mass will still take place “as we pray for an end to abortion on this 45th anniversary of the Roe v. Wade decision.”

updated 11:44 am - LITTLE ROCK, Ark. (AP) — A Roman Catholic bishop who has led prayers at Arkansas anti-abortion rallies says he will not take part this year because its featured speaker is a public official who actively pushed for the state's aggressive execution schedule last year.

Bishop Anthony Taylor wrote an open letter to the state's 125,000 Catholics inviting them to special Masses instead of attending the event featuring Attorney General Leslie Rutledge.