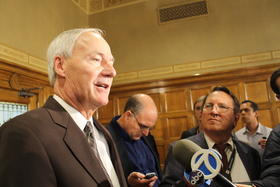 UPDATE 3:30 p.m. Gov. Hutchinson has issued a statement expounding on a brief remark made this morning about a radio station's "Babe Bracket" that ranks women television journalists based on appearance.

"I'm a big sports fan and am an occasional guest on The Buzz. Today I quipped that the program was certainly under a lot of fire—including from national sources. My point was simple—I believe the hosts of the show are well-intentioned and their long-running contest was always done without any malicious intent. My comment this morning wasn't an endorsement of any contest that is based upon looks. All women should be treated with respect, and any measurement of workplace success should be based upon talent and performance."

Original Post: Governor Asa Hutchinson is defending a local radio contest that ranks female television anchors based on their looks. The Babe Bracket is something 103.7 The Buzz has been doing for a number of years. This year marks the 21st incarnation of the contest. It coincides with NCAA Basketball’s March Madness tournament – where sports fans fill out brackets pitting teams against each other.

But earlier this month KARK News Director Austin Kellerman opined that it’s time to stop referring to “educated women” as “babes” and ranking them against each other publicly over the radio. Following his blog post, a number of women who have been put on the bracket without their consent by local jocks RJ Hawk, Tommy Smith, and vocal Donald Trump-supporter David Bazzel have expressed dismay at this objectification of women in the media. But others have shown continued support for the contest.

Speaking on The Buzz Friday, Governor Asa Hutchinson lent his support for the Babe Bracket.

“Y’all have some fun and everybody enjoys it. We have to be careful not to be too politically correct. I think everybody knows the good spirit that it is in,” Hutchinson said to the radio hosts' audibly enthused delight.

Past contestants (selected by the hosts, TV journalists don’t enter it) include several reporters that regularly cover state politics and the governor’s office.