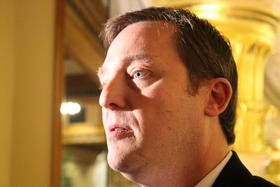 An impasse over the Arkansas Treasurer’s budget is being averted in the state Legislature. After two-days of falling short of the needed three-quarters vote, lawmakers moved on Thursday to strip a contested provision, regarding a proposed tax deduction for contributions to a savings fund for private education. Representative Lane Jean spoke from the well of the House.

“Colleagues there is an impasse. We have even lost some votes today. I’m to ask that we…strip the 529 out so that we can have a Treasurer’s budget. The governor has confirmed this will be on the special call,” said the Republican from Magnolia.

Critics of the attempted change, which includes most but not all of the Democratic caucus, say it amounts to sending public dollars to support private schools. 529 savings plan funds can be withdrawn for higher education and under federal law K-12 private education. The attempt to amend state law would have made contributions to 529 plans - for use in private education - tax deductible for the first time, to the tune of up to $5,000 per parent ($10k total). The Arkansas Times notes the creation of this new tax deduction to support private education could cost the state $5-million annually.

A special session could be called next week. There it will only require a simple 51-vote majority since it won’t be attached to the overall Treasurer’s office budget, which was done since lawmakers entertained the idea under the rules of the biennial fiscal session.

House Speaker Jeremy Gillam lamented that the amendment to the Treasurer’s budget failed to gain supermajority support – by just one vote on Wednesday - but promised lawmakers another shot at it.

“I’m asking that I get signatures for both parties for this,” said Gillam. “It’s not what I wanted to do but we must sometimes set aside what our personal preference would be and do what is necessary for the greater good.”

The college savings plan amendment would be added to the primary purpose of the proposed special session. Governor Asa Hutchinson signaled last month he would call a session on pharmacy benefit management issues regarding a recent change in Arkansas prescription reimbursement rates tied to CVS.

*This article has been edited to reflect corrections about the tax deduction in question. This article originally stated it was for withdrawals but the intended legislation would create a deduction for contributions to the plan.