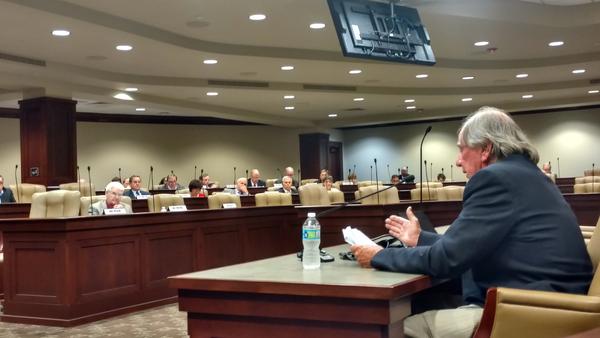 Arkansas legislators on Friday allowed a prohibition on the sale and use of dicamba to take effect. The Executive Subcommittee of the Arkansas Legislative Council took no action on the proposed 120-day ban, a decision that upholds a ruling made last month by the Arkansas Plant Board. The ban will officially go into effect Tuesday at 12:01am unless members of the council move to reverse it.

Dicamba is a herbicide applied to genetically-tolerant soybean and cotton fields in order to kill pigweed, which has lately grown tolerant to other weed killers like Roundup. The use of dicamba has led to hundreds of complaints from farmers and growers throughout east Arkansas. After being applied to tolerant fields, the pesticide is known to drift in the heat and wind onto non-tolerant crops, causing them damage.

On Friday, the Missouri Director of Agriculture also announced a sale and use ban on dicamba in that state.

By Friday’s end, the Arkansas Plant Board had received 593 dicamba-linked complaints originating in 23 counties. The most complaints—141—have come from Mississippi County.

The legislative joint House and Senate Agriculture Committee on Friday heard testimony on the chemical’s drift patterns and volatility this growing season.

Ford Baldwin, a professor emeritus in agricultural science with the University of Arkansas, briefed lawmakers on the evidence he has seen in row crop fields across the Delta suggesting that the damage dicamba has caused is more pronounced than is commonly recognized.

“There’s no way I can describe to you how bad this looks…unless you physically go up there and look at it,” Baldwin said. “There’s no way you can fathom what I’m telling you unless you go look.”

The University of Arkansas Cooperative Extension Service has estimated that the state’s farmers planted approximately 3.55 million acres of soybeans this year, making it the state’s biggest cash crop. In a typical year, Arkansas soybeans generate about $1.7 billion, with an average yield of 40 bushels per acre, the extension service says.

In his testimony, Baldwin said non-dicamba tolerant soybean fields could see yields reduced by as much as 25 to 50 percent if they are contaminated by the herbicide during certain stages of growth. On Wednesday, Arkansas Plant Board Director Terry Walker said only about a third of the state’s soybean fields are dicamba tolerant, leaving the rest susceptible to damage. The chemical can damage other crops as well, including fruit trees, tomatoes, watermelons and cotton.

“I won’t even engage with people now that want to tell me that we’re over-blowing this thing and we’re sensationalizing,” Baldwin said.

Baldwin described how, after application on fields, a mass of the chemical can develop in the air under certain weather conditions and be transported “miles away.”

“What I believe there’s no doubt of what’s happening out there right now is you’ve got… spraying in these large areas in high temperatures. You’ve got the volatility that’s cooking off of these fields. And some of [the pesticide] will drift like physical drift, but what’s happening with a lot of it is accumulating in temperature inversions at night,” he said.

Balwin said that two to three weeks after a dicamba-intolerant crop shows drift symptoms, “the bomb goes off” and more severe symptoms occur. He said even with a ban on using the chemical, there may be some who choose to use it illegally.

Baldwin noted that other states are starting to see an uptick in complaints linked to dicamba. He predicted that as temperatures rise over the course of the summer, complaints would also start to rise in many north and Midwest states where soybean planting is prevalent.

Last December, the Arkansas Plant Board approved only one formulation of dicmaba, called Engenia, for use in the 2017 growing season. The formulation, produced by the chemical company BASF, was thought at the time to be less volatile than other formulations. Farmers have been able to spray Engenia on tolerant crops varieties genetically-engineered by Monsanto. The tolerant varieties of soybeans and cotton are sold by Monsanto under the trade-name “Xtend.” Monsanto also sells “Roundup-Ready” seeds. However, in many areas of east Arkansas, southeast Missouri, west Tennessee, and Mississippi, pigweeds have developed resistance to Roundup.

Uncontrolled growth of weeds in row-crop fields can lead to reduced yields and less certainty about the economic returns during harvest. In many areas of the state, farmers may have already completed most of their seasonal practice of pesticide spraying. But in order to further control weeds, many farmers in the state are expected to turn to more old-fashioned methods of removal—like using physical labor to extract the weeds with hand tools.

State Rep. Joe Jett (R-Success), who said he is a row crop farmer who has purchased dicamba-tolerant soybeans from Monsanto but has chosen not to spray the pesticide on his fields, questioned Dan Westberg, the technical service manager for BASF. Jett argued that to stay profitable, farmers have become bound in unfair agreements with large companies that sell agricultural products.

“By no means are we forcing or requiring growers to purchase dicamba technology,”  Westberg said in response.

Westberg said in his opening remarks that “the proposed dicamba ban would leave farmers defenseless against these invasive weeds... and deprive growers of a critical crop protection tool at mid-season, or in some in some areas, particularly in the southern part of the state—toward the end of that season.”

Westberg said many farmers were successfully applying the Engenia formulation. He suggested that many of the problems were caused by misapplication, including incorrect spray nozzle usage or spraying at the wrong height and in the wrong weather conditions.

Two weeks ago, in a remarkable move, the State Plant Board of Arkansas voted to ban the sale and use of a weedkiller called dicamba. It took that action after a wave of complaints about dicamba drifting into neighboring fields and damaging other crops, especially soybeans.

That ban is still waiting to go into force. It requires approval from a committee of the state legislature, which will meet on Friday.

This week the Arkansas Legislative Council may decide whether to approve a 120-day ban on the sale and use of the herbicide dicamba.

A maligned but crucial row crop herbicide that’s led to disputes among neighbors and at least one class action lawsuit could be on its way toward becoming banned in Arkansas.