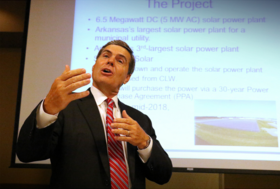 While the energy sector is bracing for higher prices under the impact of President Trump’s 30-percent tariff on solar goods manufactured outside the U.S. the city of Clarksville is ready to turn on Arkansas’s largest municipal solar array. The $10 million project was constructed by Arkansas-based Scenic Hill Solar. It’ll ceremonially open on Wednesday six months ahead of schedule.

CEO Bill Halter says it was made mostly with imported parts out of necessity. He expects future arrays to be more costly with the imposition of tariffs.

“There was simply no American made product available for the project. We literally could not find any American made modules available. The largest U.S. based manufacturer, First Solar, they’re completely sold out of their equipment well into 2019,” Halter told KUAR.“We have been working to prepare for it but at the end of the day it’s going to be an increase in the price of equipment and that’s going to make these projects more costly.”

The tariff proposed by the President on solar equipment made outside the U.S. stands at 30 percent and drops to 15 percent in its fourth year. The administration’s decision followed a US International Trade Commission case that found imported solar products “are a substantial cause of serious injury to domestic manufacturers.”

The Trump administration argues that the solar sector in other nations, like China, is too heavily subsidized. That in turn makes it an unfair competition for American manufacturers that don’t receive the same-level of government support at home. In the current energy economy, manufacturing amounts for a small share of solar-related jobs.

But Halter thinks it's too late to turn around the manufacturing side of things, "It's certainly not the optimal timing for the policy. We've lost a lot of manufacturing and don't have a lot left. Now, the consequences will be largely on the folks who are building and installing the systems and on their customers."

But Halter says even with an anticipated higher cost for parts that solar is still a good deal, “they will still save money over time; they’ll have independence from the vagaries and volatility of the market; it’s clean energy; and they’ll use local workers to do the install, so it’s still a great sector.”

While the 42 acre, 2,000 panel, 6.5MW Clarksville site relied on foreign manufacturing, Halter says Scenic Hill Solar has utilized American suppliers for other projects. In 2016, the company installed solar plants at a L’Oreal plant in Arkansas and Kentucky.

While solar is a rapidly growing industry, Arkansas still lags behind the rest of the nation in utilizing the renewable fuel. A report this month by the Solar Energy Industries Association found 0.07 percent of the state’s electricity was generated from solar power in 2016. That places the state 43rd in the nation.

By comparison, California leads the nation with 15.4 percent solar use. The nation as a whole only gets two percent of its power from solar energy.