ShareTweetEmail
Listen
Listening...
/
Leticia Sanders and Jared Henderson are seeking to be the Democratic Party of Arkansas's gubernatorial candidate. KUAR's Jacob Kauffman reports on the race ahead of the May 22nd primary election. 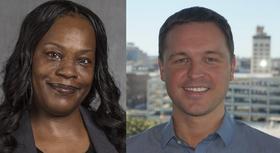 There are two candidates for governor on the Democratic primary ballot. Both are political newcomers with different backgrounds, levels of political backing, and degrees of adherence to Democratic Party norms. KUAR’s Jacob Kauffman has this report. Election Day is Tuesday, May 22nd.

Both candidates are relatively unknown, but by most metrics Leticia Sanders is the underdog in this race. Sanders graduated with a degree in public administration from Arkansas Baptist College and earned master’s degrees in Human Resources Management and Management and Leadership from Webster University in Missouri.

Her campaign hasn’t raised much money, hired any staff, or spent much time on the campaign trail. She has spoken at about a dozen places, including a few TV interviews. This former letter carrier, now a hairstylist isn’t deterred.

“I’ve been prepared by my creator to be doing this, through all the things he’s put me through. I’m one of the people, so that’s why I’m running,” she told KUAR. “I’m running for the people.”

Sanders says she was fired from a manufacturing job at Nevada Railroad Materials in North Little Rock for running for office. A representative of the company says Sanders was hired as a temporary employee and the end of the period of employment had nothing to do with political activity.

Jared Henderson’s campaign is a professionally run operation. He’s out raised Sanders $171,000 to $2,700. He’s been an active campaigner throughout the state.

“I’m running because I want us to set big goals,” Henderson told KUAR, “The governor said in January that the state of the state has never been stronger. Well, if you get out of five or six counties in the state, that’s ridiculous. Let’s just name that. We don’t have to wallow in it but let’s say, ‘Alright, what are we going to do about that?’ There are things we can do and it starts with recognizing that we have the capacity to do better.”

Henderson earned master’s degrees from Harvard in Business Administration and Public Administration. He worked as a research scientist for NASA before becoming state director of Teach for America’s Arkansas division from 2013 to 2017. Education is his passion in the campaign as well for governor as well.

“The heart of the issue is about the health and the attractiveness of the teaching profession. If we can get that right, if we can keep our best people in the profession, if we can get out of their way, if we can really inspire the best of our young people to enter our most important profession then we’ll have a fighting shot at building an excellent and equitable education system,” said Henderson. “If we don’t get that right nothing else will matter, even if we throw more money at it.”

He’d also like to see veteran teachers subjected to less stringent testing and review requirements than rookie teachers. Sanders thinks there’s too much testing too, but her top education goal is to expand pre-K.

“We have to start by allowing two year olds into a pre-K program to better educate them, to get them informed, and not wait until they’re four or five to say, ‘Hey now you’re ready to grasp what you already know.’ Children are born with intelligence.”

While Henderson sees education as the common denominator in alleviating many of Arkansas’s shortcomings, Sanders prefers to focus on fully legalzing, growing and taxing hemp.

“It actually was legal back in the 1700s, just as the prohibition as far as alcohol was illegal and then illegal back in the 1920s,” she said. “We can actually create clothes off of hemp. We can save the environment with hemp, it’s the most safest fuel that we could’ve used and continue to use. It’ll grow the economy.”

Henderson thinks a more sound way to generate economic growth is to assist small businesses in underserved communities with financing.

“I met people all over, both in the campaign and in my previous work the last several years, in the Delta and south Arkansas and around the state that have the desire and the capacity to start a small business. But they usually need access to a little bit of seed capital. We’re not talking hundreds of thousands of dollars, even five or ten thousand can make a difference. The other thing they need access to is affordable health care,” said Henderson.

He’d also like to continue some of Governor Asa Hutchinson’s efforts to seek out foreign investment in the state, “Every time we get a new enterprise in here that’s going to employ some folks I’ll stand up and clap at that ribbon cutting too. That’s a good thing for Arkansas and I don’t mind saying so.”

The Republican governor is seeking re-election, and has a primary challenger Jan Morgan.

But Henderson’s not a fan of the governor’s plans to lower income tax rates for the state’s wealthiest tax bracket. He says it’s the wrong priority for a state in need of better services and higher teacher pay. Sanders however, believes that the state shouldn’t collect any income tax at all.

“I know that some people are not aware that individuals are not supposed to have direct taxation. We’re worried about income tax, income tax came into law in 1936 by the U.S. Supreme Court allowing that to come in. We shouldn’t even have income tax,” Sanders said.

Her position on abortion is also out of step with the Democratic Party platform. She calls abortion “murder” and turns to her interpretation of the Bible for guidance, “'Though shall not kill.' It didn’t put a stipulation that you’re able to kill because you don’t want that baby. It says, 'thou shall not kill.'”

Henderson strikes a different tone. He says he respects a woman’s right to choose to have an abortion or not. But he thinks the focus should be on reducing teen pregnancy. For him, it’s an issue that hits close to home.

“Like almost everyone else I’ve met in my life, I want abortion to be rare too. I want women to have access to it when you really need it but I want to create conditions where it’s not as necessary. I was born 40 years ago to an unwed teenage mother that gave me up for adoption in the first week of my life. I’ve been thinking about abortion all my life, decades before I stuck my toe into politics. It’s not something trivial to me, it’s not just a political issue. It’s not to most people that really think about. I think there’s so much missing common ground.”

The Democratic Party primary election for governor between Jared Henderson and Leticia Sanders is Tuesday, May 22nd. Early voting is underway.

Editor's note: This article has been updated to include Leticia Sanders educational background, work with Nevada Railroad Materials, and some detail on her campaign activity.