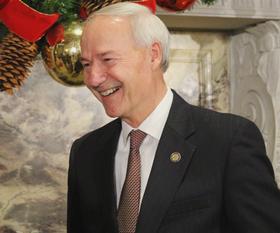 Governor Asa Hutchinson is continuing his push to find so-called efficiencies in state government with a pair of re-organizing proposals for the legislative session beginning in January. At a press conference on Monday, the Republican governor announced he wants to move the Office of Energy from the state Economic Development Commission to the Department of Environmental Quality and to reduce the number of Criminal Detention Facilities Review Committees from 28 to eight.

Hutchinson said moving the Office of Energy out of AEDC is a move for “mission alignment.”

“What really out an emphasis on this better alignment is the fact that we will be receiving through the Volkswagen settlement approximately $14 million within the next year, presumably. Those funds will be most beneficially administered through the Arkansas Department of Environmental Quality but they will be energy related,” said Hutchinson.

Arkansas is one of 43 states that successfully sued Volkswagen for deceptive trade practices related to emissions reports and software for certain diesel vehicles. Although, state officials like Attorney General Leslie Rutledge and Hutchinson don’t generally believe the higher than reported carbon emissions from the vehicles lead to climate problems. The Environmental Protection Agency contended VW violated the Clean Air Act.

“If you’re in a rural community, you have one inspection a year that’s mandated and you have committee that does that inspection. If you reduce the number to a smaller number they’re going to be more active and have more skills, training, and expertise because they’re engaged in a more regular basis,” Hutchinson told reporters. “…you increase the expertise of the committee members, it’ll be more meaningful for them and yet they’ll be able to fulfill their mission.”